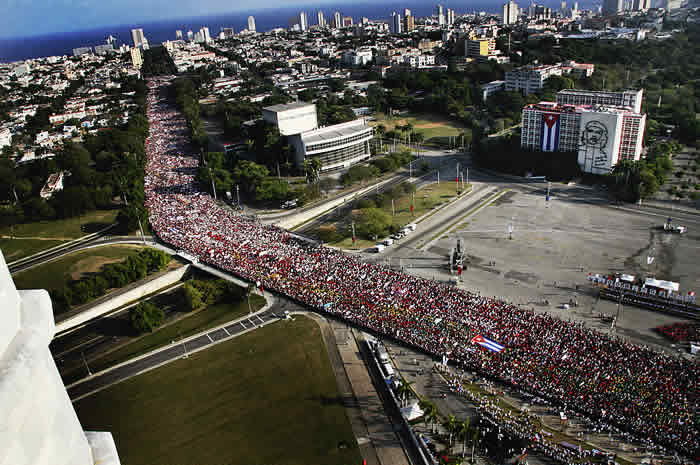 She said it with a tone somewhere between surprise and disappointment:

“They don’t give a damn, Ernesto. How mistaken we exiles are.”

And I nodded because I knew too well what she was talking about. For her, a woman from Santiago who hadn’t stepped foot on her native land since 1999, living in Miami and linked to the Hispanic media, it was a startling discovery.

For me, with my memory too fresh, it was just a description of a cadaver that I knew every inch of: the cadaver of Cuban freedom, seen through the lens of national apathy.

My interlocutor had returned the day before from her simmering and fun-loving Santiago. She went there more for a family emergency than for an excess of nostalgia or tourist reasons: her mother has lung cancer.

Her narratives of a country defeated by an army of the hungry, the ineptitude, the lack of productivity, the shortages and unsanitary conditions, fell into the background. She summarized it in two quick sentences.

Her real discovery, that which — I am sure — she would tell a hundred more people after me, was another:

“They are accustomed to living without freedom. Meanwhile, over here, we overestimate the “popular support” for the dissidents; over here we have the idea of a people in rebellion against their tyrants, people aware of the protests in the streets, the Ladies in White, the opponents of Palma Soriano, I didn’t find any of that over there…”

What did she find? A panorama that she seemed to be seeing again in front of me, image after image: a sweaty crowd, their carefree faces, moving their hips to the beat of reggaeton playing on the speakers. Hundreds of young people pressed tightly together, not to defend women from police beatings, but to buy the bad-smelling beer sold by the State. Arguments, at full throttle, hundreds of screams, not asking to be able to travel freely, not demanding freedom of expression and association, but rather discussing the latest baseball game between the Industriales and Santiago.

“When I asked them about the opponents of Palma Soriana who we’d seen dozens of times in the media in Miami, I almost always found the same reactions: indifference. This, in the best of cases. In the in-between cases: ‘These are shi..ters… they live to get beaten, total, they’re not going to change anything.’ In the worst cases, ‘The only thing they’re looking for is a visa to leave the country.’”

Inevitably, I recall the opposition I knew in my country: honest, consistent, serious. People who had paid a huge price for daring not to be two-faced. But I couldn’t help but think, also, of a certain little up-and-comer in a youth opposition party in my city who, after my expulsion from the mass media, wanted to “hire” me to teach journalism to the ten members of his group. What was the attraction that “freedom fighter” found to tempt me with his offer?

“You give us some little classes, which you can, and I will immediately sign a certificate saying you are politically persecuted and have collaborated with the dissidence. With this and your own history, you’ll be in la Yuma — the U.S.A. — before you know it….”

I still check my conscience regarding whether I was too hurtful in my response.

But what I don’t doubt is the God’s truth: The romantic enthusiasm that permeates certain circles outside Cuba, that constant feeling of the epic of a people in struggle against their oppressors, this perspective of society that has closed ranks in search of its rights; it is a beautiful view, but false.

Cuba has eleven million souls. Ivonne Malleza is one. José Daniel Ferrer is one. The Cuban Commission for Human Rights and National Reconciliation is Elizardo Sanchez. Bloggers truly active in the struggle don’t exceed ten. Yoani is one. Dagoberto is one. Biscet is one. The courageous protagonists who protest by banging on pots and pans in the Cuatro Caminos markets and who protests in Fraternity Park never exceed five, always surrounded by fifty, a hundred, impassive observers who do not move a finger to fend off the thugs.

I want them to be more. There were not ninety Ladies in White scattered throughout the country, but there were at least ninety thousand that should have been. I wish that the nine million Cubans who affixed their signatures (signatures infected with fear and apathy) in 2002 to guarantee Socialism in the Constitution of the Republic, would have added more of their names to the Varela Project, which that same year collected eleven thousand real names. I wish that one day the crowd would be reversed, and that the handful of those cornered, encircled by the crowd, were not Laura Pollan and her women, but rather the tools of the system surrounded by brave Cubans. But my desire is not enough.

We Cubans crush the larvae under military boots, and as Kant warned, “Whomever voluntarily turns worm should not protest if they decide to trample him.” Two million of us have escaped. Eleven million remain inside. Half of those eleven million also want to escape. Of the other half, the majority watch the bulls from the sidelines and wait for better times. They subsist. A much too small minority don’t want to escape, nor are they resigned to living without freedom, They are almost as few as the family that has taken over the whole Island, and that will drift away only when all its members are already dead.

So brief is the recent history of my country. In a cruel paragraph one can put tons of words, books, frustrations, desires, longings.

I think it’s time to take off our masks and look at our wrinkles in the mirror: The Castros won. They will die in power. They will yield when it pleases them, or when it pleases biology. And the millions of Cubans (unmotivated at present) in the public plazas every May Day, the hundreds of Central Havanans congregating in front of the homes of the disaffected to launch repudiations, insults, blows, and those who looked with amazement at my friend, a woman from Santiago who thought she would find her countrymen at war and found them at a party, they are the undeniable trophy of the winners.