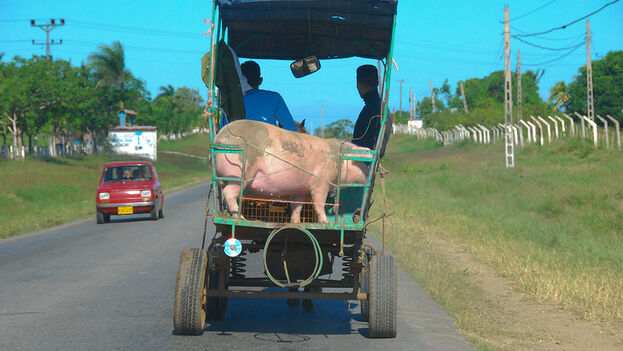 14ymedio, Pedro Acosta, Havana, 16 April 2020 — For lack of other meats, pork has taken center place in the diet of Cubans who can classify as “emerging middle class” or who are on the way to taking their place on that social perch. Fresh fish, sea food and beef are the privilege of that ten percent who don’t ask “how much?” before deciding to buy something. The rest of the population hopes for sausages and canned sardines, and line up early when the rationed chicken arrives.

Pork, however, shows up in one degree or another at all levels of consumption. This is the reason that any situation that decreases its production or hampers its transaction is reflected immediately in its price. The response of the State, which tries to control everything, wavers between rationing and applying a price cap.

A few months before the crisis caused by Covid-19, a rule was announced to regulate at 45 pesos (CUP) the maximum price for a pound of boneless pork in the capital city. In the other municipalities of the countryside, the top price remained at 35 pesos.

At the present time, in the middle of April, a pound of pork on the hoof varies between 25 and 30 pesos. The hunting-down of each animal is quoted at 50 pesos, because these hogs are not in a stock-yard waiting for someone to come by and pick them up. Detective work is required which consists of verifying who has the hogs and in what place the hogs are kept ready for sacrifice, in addition to going out on horseback to round them up.

On top of this, the drover who exercises this roundup has to pay at least 600 pesos to the wagon driver who will deliver the condemned to the abattoir, and to the executioner goes another 100 pesos for each hog he kills and cleans.

Throughout this process (similar to what the State calls “chain port transport internal economy”) [sic] and at each of these steps the crises is felt. For there is no hauling if fuel prices are too high, and the vigilance for anything which might appear illegal has become insufferable.

As it is dangerous to raise prices at the point of sale, which is the only point under surveillance by the authorities, the merchants have begun to close their butcher shops — at least the visible ones that operate under license. This doesn’t mean that the business has ceased. Each butcher has a fixed number of clients whom he knows personally. Selling to these on the sly suffices to continue earning at least enough to live.

This brings to light a feature of the dark mechanisms of the informal market. When the producer comes to the conclusion that competition doesn’t affect him and that the consumer has no alternative but to accept the prices the producer imposes, the stimulus to increase production in order to earn more disappears.

One needn’t be an economist to realize that this generates a vicious cycle in which the prices enter into a spiral.

Where does it end, and when? First, we need to know when the pandemic ends…