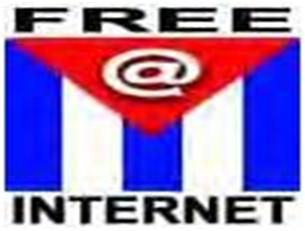 The predictions for the development of internet in Cuba added to the darkness, after the coming of the fiber optic cable to Cuba collided with the political interests of the Communist government which, in the last decade, developed a legal and technological infrastructure, to control the flow of information to and from the island, via internet.

The majority of independent bloggers are expecting to see what will happen, this upcoming July, the structure of the web on the island, connect to the optical fiber cable, in the beginning of February, came to the island from Venezuela.

The anticipation will multiply by 3.000 speed of data transmission, but also serve for the government to confess its fear using individual virtual tools of information.

In 1996 Cuba officially connected to the internet, but the government left sitting, legally, its political respect to full access of the services that are offered. Ever Since the “internet of internets” is administrated centrally from the Telecommunications Company of Cuba S.A., ETECSA, and exploited by authorized state institutions expressed by the Ministry of Information and Communications (MIC).

At the end of January, the government announced the sale of foreign actions by ETECSA, and the purchase, in $706 million dollars, for part of RAFIN, another Cuban company. The possession of the major part of the actions, Cuba allows the primary provider of public service of “Transmission of Data”.

“Increasing the sovereignty technology in the development of the infrastructure of telecommunications” one of previous strategies in the Alignment of the Political Economic and Social that adopted in the event entry of the next quarter.

In late March, the daily Granma said, according to statements by Justice Minister Maria Esther Reus, that “Cuba will adjust the existing legal rules to the decisions that are adopted as a result of the Sixth Congress of the Communist Party of Cuba.”

Motivated by the arrival of fiber optic cable to Cuba, the deputy minister of MIC, Jorge Luis Perdomo, referred to the development of the first Telecommunications Act to regulate the sector and to “promote in an orderly way” the services it encompasses.

Since 2000 the Cuban government implemented, legally and technologically, an infrastructure that allows it to control access by Cubans to the Internet, through a hierarchical network of state agencies, identified as providers of “public Internet access.”

That same year, it legally established an international common access point to the network (NAP), ensuring that all international outgoing Internet goes through this connection. Thus it assure that the interconnections between domestic internet users are routed through national means of transmission.

Providers of Public Service Internet Access can not accept requests for installation for a person who is not authorized by the MIC. However, the regulations governing the activity requires them to accept as users “all natural or legal persons who want it.”

However, the laws themselves have the reservation. Suppliers offer their services “… with no other limitations than those imposed by the laws in force in the country. ”

Since 1996 the government declared that “… access to the services of the worldwide information networks will be selective” and “will have to be approved by the Interministerial Commission, composed of five ministers and chaired by the head of the MIC.”

The strategy was “… full access to the internet … but in a regulated manner.” The line was drawn “according to national interests, focusing on the connection of legal persons and institutions of greatest relevance to the life and development of the country. ”

Among other legal commitments, these Providers “are required to define the authorization to persons and entities who need to use services to access national or international Internet,” including “… remote access … from the home or anywhere in the country … and from the exterior.”

They also have a duty to report the number of users with full access to the Internet, those who have email accounts and IP addresses. They also demand the number of computers that access the network from places of residence and access for the public. A provider who fails to comply with the regulations of the MIC, loses its operating license.

In 2004 the government named an “Internet Zone”, with spaces in hotels, Internet cafes, etc., which provide navigation services of the Internet and e-mail to the public, at prices between 1.50 and 10.00 convertible pesos (CUC) for one hour of access to the web.

and in 2008, they fully regulated service these centers, after president Raúl Castro announced that the Islanders could receive services in hotels, and were authorized to buy computers on the retail market in hard currency.

From that time the alternative Cuban blogosphere began to develop, currently composed of 40 blogs of government critics, belonging to a group of citizens, especially young people, who update their sites from the hotels, embassies and with the help of friends abroad.

Providers must also block “access to sites whose contents are contrary to social interests, ethics and morals as well as the use of applications that affect the integrity or security of the state.”

One of the jobs of the Interministerial Commission created by the government in 1996 was to ensure that information disseminated “… is accurate, and that it is obtained is in line with ethical principles, and does not affect the interests or security of the country.”

On the eve of XIV Informatics Convention and Trade Fair 2011, held in Havana in early February, the government opened access to the Cuban Voices Portal and to the blog of Yoani Sánchez, Generación Y, on Cuba servers.

The government is mainly concerned that the new generation of dissidents is using Twitter, Facebook and other online social networks. These websites were used to organize protests that led to several revolutions in the Middle East and Africa, earlier this year.

The possibility that the government, at the upcoming party congress, would adopt measures restricting the use of new information technologies and full access to the network, added to the concerns of those who use it as a means to exercise freedom of expression.

The advance in technology development, represented by the arrival of the fiber optic cable from Venezuela to the island, has been overshadowed by State Security’s consideration of the “Network of Networks” as the new “battlefield” and the official media’s demonizing the use communication equipment. Faced with these developments there is no doubt that the future of the Internet in Cuba is uncertain.