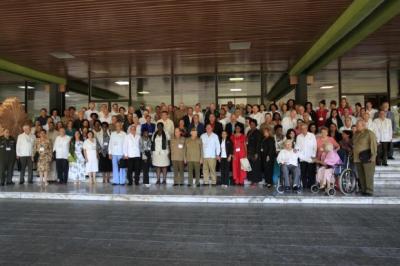 I attempted to keep my mouth shut during the celebration of the Congress and to analyze the event with a positive mind, but I could not do it. I can’t stand it when communists talk about democracy, where a single party exists as does the unity of power.

Theoretically the explanation of these principles is very dull, but in practice it has a very simple demonstration. It’s enough to refer to the official reports published in the press organ of the Cuban Communist Party (PCC), where the State Council, a constitutional organ which is subordinate to the Parliament, acts according to the Party’s Political Bureau.

Apparently, at the time of making decisions, multiple organs intervene. However, with the new election of the Political Bureau, 10 of their 15 members make up the State Council. That is called concentration of power, but communists like to call it “democratic centralism”.

Despite the fact that, in his 3 years of rule, Raul Castro dismissed political figures which were named by his older brother, 20 of the 31 members of the State Council make up the PCC’s Central Committee, and 72% of those members of the partisan body are delegates.

In fact, it is predicted that the level of agreement will increase with the next mandate of the Parliament which will begin in 2013. In January 2012 they will celebrate the PCC’s National Conference, which aims to restructure the composition of the Party and where pre-candidates will be chosen for the next general elections to fill the State positions.

Regardless, by law, the members of parliament must approve the guidelines assigned to them by the Party through their Political Bureau. The Constitution of 1976 acknowledges that the PCC is the “leading superior force of Cuban society and the State”. That same acknowledgment is also found in the first article of regulations of the National Assembly.

The most worrying thing about this is the priority which the concerns of those who elect them occupy in the agendas of the rulers. For example, Raul Castro is Chief of State and Government, while also First Secretary of the Political Bureau of the PCC’s Central Committee. Will he have enough time to worry about the problems of the Second Front municipality in Santiago de Cuba which he represents?

Esteban Lazo was elected by Arroyo Naranjo. Besides being a member of the State Council he is also a member of the Political Bureau and the Secretariat of the PCC’s Central Committee. I wonder if this man knows that the territory from which he was elected is the poorest of the capital and the one with the highest rate of violence.

The partisan structure and integration coincides and confuses itself with the state level. Under those conditions, it is not strange that the political decisions of the partisan minority, made up of nearly 800 thousand members, will be unanimously approved in the National Assembly, that organ which represent and expresses the will of more than 11 million Cubans. It is there where the trap of socialist democracy lies.