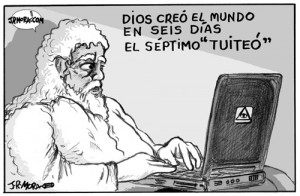 God created the world in six days, on the 7th, he tweeted. 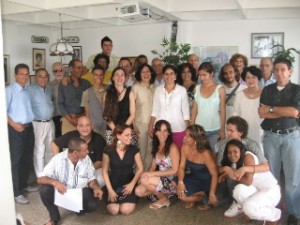 Last month, Yoani Sanchez, the creator of Generation Y, invited some of her friends to contribute to the diffusion of micro-blogging through the group known as “The First Tweet-up on the Island.” In regards to such a meeting, I asked when and where.

Although I have not followed the chronogram of the next meeting, I bet it will be successful and occur soon because Yoani’s summoning power is supported by more than 50 thousand followers on Twitter and millions of readers of her personal blog. If she was able to establish the Blogger Academy in Cuba, she will also be able to set up this web of interchange between those who use that tool of brief and current messages that travel from an individual to the masses.

According to Jack Dorsey, founder of Twitter, his invention is not a social network, instead it is a communication platform that has grown, worldwide, from 44.5 million users in December 2009 to 100 million users just this past June.

Some considered Twitter to be a trend used by celebrities – Al Gore, Barack Obama, Ashton Kutcher – and it was abandoned during the first month by 4 out of 10 users, and that is a bet in favor of micro texting, conciseness, and brevity, which adjusts itself to the urgency of the times and to the desire of reading about those lives parallel to ours.

The phrase “What are you doing right now?” is what dominates this technology, but it also serves as a source of social information, civic activism, and also provides a space for denouncing crimes. We must recall that in 2008, a tweet from China reported an earthquake 7 minutes before the media of that country did. One year later, thousands of youths in Iran used Twitter against the electoral fraud that shook up the power of the Ayatollahs. Meanwhile, in Cuba, Yoani Sanchez posted about the death of Orlando Zapata Tamayo and the start of the hunger strike of Guillermo Farinas.

The virtual inhabitants of Twitter respond by what they publish, and the velocity of micro-journalism functions as a network which channels the anxieties of the population, which warns and limits power for those in the press and in the government.

Up till now, it is not possible to know exactly how many Cubans have access to the twittering in cyberspace. We know that many alternative bloggers and also state functionaries use this nanotechnology novelty. We have yet to see if rivers of public and private messages will occur, similar to the situation which occurred with drivers in Mexico City which created a Twitter network to alert drivers about blood alcohol level tests.

Perhaps we have other priorities in Cuba, but if Yoani Sanchez already decided to organize “the first tweet up on the island”, such an organization would not lack members who would create profiles, upload web applications to the computer to transfer messages onto their phones, or to create accounts for people who wish to use the website http://twitter.com/ to reach that new communication platform through messages and projects that would ultimately save free expression.