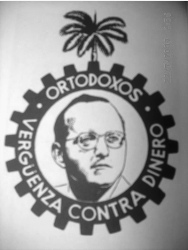 The Cuban government, shackled by a chain of failures after seven long years of inflexibility, decided to begin releasing political prisoners jailed in the spring of 2003, in order to change its image abroad, to seek aid, and to proceed with a reform called “update the model.” This shift underscores the failure of inflexibility and the decision to change certain things. Though it certainly does not mean that the Government is moving toward democracy, the attempt itself entails the introduction of certain measures, such as the release of prisoners, which lead to a more favorable scenario for additional steps.

In the face of this challenge, it is important to consider why, since the emergence of the republic in 1902, Cuba has changed again and again and again, yet has always returned to the starting point. The principal cause of these setbacks is the lack of citizen participation as agents of change, due to the weakness of civil society up to 1959, and its disappearance after that date. That is, we approach possible changes from the past, representing a real threat of repeated setbacks.

The absence of the people, not as followers of this or that leader, but as agents of change has resulted in politics being monopolized by elite figures or characterized by personalism, messianism, the use of physical and verbal violence, and the use of public power as a private reserve, a fact that should be taken into account to avoid the upcoming changes once again ending in regression. To that end I will try to highlight some roots of these evils by analyzing facts and figures. This time I’ll spotlight a man who became involved in the fight against political and administrative corruption.

Eduardo René Chibás y Rivas (1907-1951), journalist and politician, exalted character, talkative, bold and eccentric, joined the Student Directory, 1927 and 1930. He was imprisoned and was exiled on several occasions. He was a member of the Partido Revolucionario Cubano (known as the Authentic party) founded in 1934, and was elected in 1939 to the Constituent Assembly, representing the House in 1940 and Senator in 1944. In 1947, as a the result of an internal split in the Authentic Party, he founded, along with other leaders, the Party of the Cuban People (known as the Orthodox party),and was nominated for the presidency of the Republic in the elections of 1948 and 1952.

Chiba proclaimed himself as leader of the Moral Revolution. Bad politicians, he said, “steal from the people to enrich themselves”; all domestic political struggles are rooted in dishonesty, it is essential therefore to put the reins of the Republic in clean hands, however it would be wrong to reduce moral responsibility to regulate human behavior in social relationships with administrative honesty. The simplification of the concept allowed him to use it as a weapon against their enemies in elections, but it was unusable as an instrument of profound changes in the political class and the people. It had a purpose: to draw attention to administrative corruption in a time when that evil was widespread. His slogan, Shame against Money!, was used to achieve power as an immediate objective, but not to build the nation honored with social justice that he himself professed.

Chibas made heavy use of freedom of the press. As early as 1934, the Silver Anniversary edition of the magazine Bohemia, he appeared among his colleagues. In addition to The Crucible and other newspapers he used the CMW radio station CMW The Voice of West Indies, the CMQ and COCO, forming a new style of Cuban policy, based on the use of the media to stay in the limelight of public interest.

A relentless accuser, controversial and contradictory, he constantly turned for defense to verbal aggression. In 1933, with the dissolution of the Pentarchy, he proposed Grau San Martín for president; in 1946 he praised the work of Grau with the following words: “In education we have been effective for the first time in the history of Cuba, which was a dream of Marti and a desire of Estrada Palma: the republic has more teachers than soldiers.” But in June 1948, he called Grau a rival of the Borgias, “the greatest pretender given to the world since the time of Caligula, whose side have sacrificed twenty years of my life, without asking or accept anything.”

He used accusation in a systematic way. In May 1939, he accused Blas Roca of treason; in 1942, the chief of police of overstepping his boundaries; in 1943, he filed two motions in the House against Batista and against Congress; in July 1945, he accused Carlos Miguel de Céspedes of the sale of a piece of Paseo; and in January 1947, in a letter read on radio, he challenged Grau for supposed intentions to be run for reelection; in 1950, he accused President Prio of the assault on a correctional court, for which he stole the documents in a cause for embezzlement; in 1951, he accused Rolando Masferrer of placing a bomb at the home of Roberto Agramonte, and so on. His behavior earned him friends and enemies. Characterized as crazy, he replied,” I’d rather be an honorable crazy man than a shameless thief.” He engaged in duels with sabers, pistols, and fists several times.

The defense of what he considered useful at all times, led him in 1946 to defend something indefensible: terrorism. He established a distinction between revolutionary and simple attack terrorism. He said, “The use of the bomb can be explained when it is used as a cry of rebellion against a regime of terror… but never when used against a government which is the product of national will.”

Death was in his work and in his speech. In November 1939, on the eve of the election of delegates to the Constituent Assembly, he was wounded by a bullet and when asked who had been the aggressors, he said: “Do not worry about finding out, I die for the revolution, vote for Grau San Martín”; but the popularity sparked by his having been shot resulted in his coming in second in the voting. In January 1948, at a meeting of the party, he jumped on the head table and began to shout, “Put your heart into it! Orthodoxy needs a martyr!” In May of that year, on the campaign trail in the East, he said, “The day that Chibas believes he is headed for extinction, or a decline in the love of citizen, he will leave with a shot to the heart, not because of cowardice before his failure, but because his sacrifice will lead to the victory of his disciples.”

Because of his popularity polls showed him as a favorite to win the 1952 elections, but on August 5, 1951, unable to prove the charge that he had made against Aureliano Sánchez Arango, he shot himself, from which he died on August 16.

The concept of immediacy, characteristic of the revolutionary changes, did now allow him to draft a political project that would respond to Cuban conditions and the social psychology; he simply asked people to follow him. On one occasion he said, “Our people are reporting the theft of the rulers with the same calmness that they read the colored comics pages or listen to the radio.” Because of this he called out desperately to the conscience of the indifferent citizen, “People of Cuba, wake up,” without understanding that interior changes in people don’t respond to revolutionary urgencies. So, quite rightly, someone said of his death, “Chibas was a man imbued with messianic ideas about history, morality and politics. He gave no time to thought about the new order, because ultimately, the new order was he himself, a chronic disease from which we still suffer.”

At that time, as in the present, Cuba needed a change capable of breaking both the elitist monopoly of the economy as well as the politics to access to social justice. For this it was necessary to strengthen civil society, without which there can be no progress, personal or social, toward modernity. Chibas devised a perfect paradise to be imposed on a complex reality, built from his own imagination: to expel the thieves of power and put in place an honest man, servant of the nation. That man had to be his own person, who did not want or need the national heritage; the changes he advocated had to be made from the damaging pattern of staff and warlordism, two of the negative cultural phenomena rooted in our political history.

His experience shows us that the current release of political prisoners must be accompanied by the implementation of rights and freedoms, and above all the promotion of civic culture, so that the destiny of the nation does not depend exclusively on messianic leaders, who so often arise in our society.