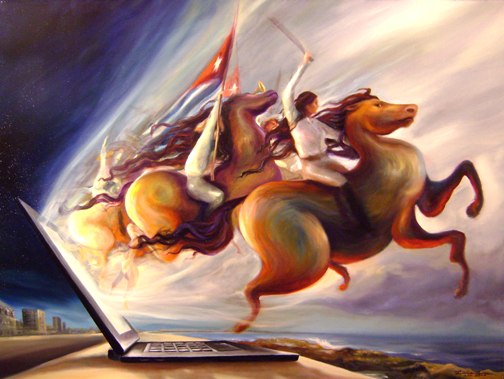 The phenomenon of the 2.0 “caught moved” the Cuban government and its think tanks. They reacted late although massively, when the image of life inside Cuba was not issued only by the official press the tourist brochures, but by citizens, either organized or as individuals, who filtered it through the mesh of the Internet to give another version, one where a phenomenon like Yoani Sanchez’s blog Generation Y was world famous.

The Arab Spring demonstrated the importance of these media of political and social activism. Redoubling our government’s concern, because internal conditions have deteriorated, and the disappointment, previously heard in whispers among trusted people, is expressed loudly today among strangers. The tendency to keep internet connection to a minimum is for this reason very evident; which should be read as state access when talking about social issues.

Speaking at the international forum on “Alternative Media and Social Networks, New Scenarios of Political Communication in the Digital Realm,” organized by the Minister of Foreign Affairs, our chancellor offered “issued guidelines.” Taming the pony–putting a patch on it–keeping a lid on it–keeping it under wraps.

This forum recently concluded, and it is presumed — if it’s true that the fiber optic cable is already operational and restricted to strategic institutions — that the cable will be thrown into the cyberwar designed at the Conference Center last week. The ancient Comandante can feel proud: the fighting spirit of old in super modern binary language.