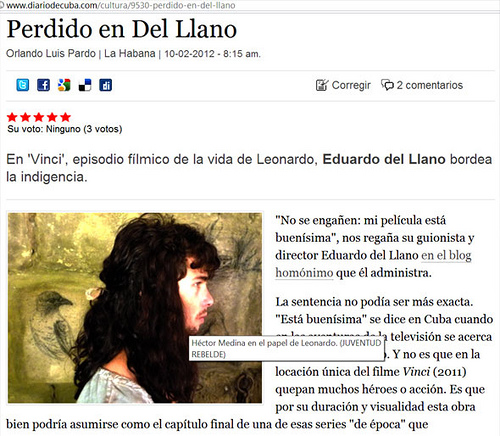 In “Vinci” the episodic film on the life of Leonardo, Eduardo Del Llano borders on indigence.

“Don’t fool yourselves; my film is “buenisima” as its screenwriter and director Eduardo del Llano rebukes us in his eponymous blog.

The sentence could not be more precise. That something is buenisima is said in Cuba in television adventures as they approach the final, definitive conflict. And it is not that the unique location of the film Vinci(2011) has room for many heroes or much action. It’s that by its duration and visual splendor this work could well aspire to be the final chapter of one of those “historic” series that routinely occur at La Cabaña[1] (There’s no art direction that can manage to conceal the truth about this jail in Havana that is nowadays portrayed so festively). And, as in any self-respecting final chapter, in Vinci everything is a bit sudden and brought on by the really long hair of an almost pre-pubescent Leonardo.

Enveloped in a little war of e-mails without any real consequence in the realm of Cuban culture, Vinci finally debuted in January on the Island and did so with nothing less than a monster-ography that bragged publicly that it was by the same author of the censored short film Monte Rouge,a canonical little work that put Eduardo del Llano between the La Jiribilla[2] and the CIA, between the dissidents and the G2[3] (wake me up if we are not already in that transition!).

This time, as was customary in each independent audiovisual of his Decalogue of Nicanor (Sex Machine Productions) it was not necessary to clarify in the captions that exhibition of the film was prohibited in the United States. Perhaps Del Llano intuited that, from coast to coast of the lands of the exile, that on no “channel of the enemy” would they be interested in pirating and conducting an “anti-Cuban campaign” with this, his most recent “buenisima” film.

Vinci is, with all and for the bluff of all, in spite of the resume of its director, the film of a beginner and those involved in it should know it, beyond the protest signs or solidarity in reaction to its exclusion from the competitive round of the 2011 Havana Festival of New Latin American Cinema. A first class crew including the director of photography Raúl Pérez Ureta and the Argentinian composer Osvaldo Montes who preferred to lower expectations of the movie to “a good film”, is no guarantee of a graceful coming out of Veni-Vidi-Vinci.

Praxis vs art, truth vs lies, acting vs lecturing, desire vs reason, who knows if also capitalism vs utopia: thematically the Renaissance was that, a magister ludi’s hat where it is possible to pull the rabbit out of any conflict. Better that we don’t make a game of the erudite exegetes of this Golgotha with a happy ending (Vinci as acronym of INRI).

More than with Mick Jagger, there’s a lot of marvelous affectation in the Diego of Jorge Perugorría in the Leonardo of Héctor Medina accused of sodomy (although this kiss of the woman doesn’t “spider” like that of the Brazilian director Héctor Babenco[4]).

Be it collective unconscious, or evolutionary convergence, there’s much of the dim and noble David from Senel Paz’s script for the film Strawberry and Chocolate,in the two common prisoners who share a cell with the more political Da Vinci who, “determined” in the opposite, demands, like a servile Piñerian serf, to wear the robe of the underclass. One of his lascivious compañeros, the illustrious and fatherly serial killer (Manuel Romero) plays the seemingly inexcusable in the style of the maniacal mimicry of the Cuban poet Delfin Prats in the documentary Extravagant Beings. The other, a pickpocket with a chicken mind and rotten teeth (Carlos Gonzalvo) is a cut-and-paste version of the humor of the Cuban TV show Kicking the Can that is the only social critique even barely allowed on our national television: the idiot as the hypostasis of the intellectual.

Right at the halfway point of Vinci, a glimpse of lucidity is sighted in the false Florence of 1476 which doesn’t escape from its cubicle at the Havana Book Fair. After seeing the placing of the immaculately clean feet of Leonardo (was he floating over the filth of the props that were his cell?) there then, literally, occurs an animation between the bars; a bird flying that no critic dares to cite in order to not commit the sin of intertextual ignorance. But if it had been conceived the other way around; an hour of animated cartoons and only a few seconds of realistic filming, (for example the rats of the CENPALAB[5] breed) the Tomas Piard[6] type ballets of Vinci and its overacted dialogues would be pardoned now as a cult piece.

“Is it that you would have had to create a native Da Vinci?”, is the question in the more rigorous Eduardo del Llano interviews. Worse, impossible. Everything in this opera primais an indigenous-ism on the verge of indigence. Without mentioning the fatality of the fauna of a Fabelo[7] that is too fabelesque to be believable. On top of that, a cameo appearance by the director at the very end falls into the ridiculous; Eduardo del Llano in museum armor straight out of the adventures of Asterix and Obelix.

Vinci is the type of aesthetic tragedy caused by being within the church and in an institution. For years now the ICAIC[8] has been a straitjacket for Eduardo del Llano and both sides know it without saying it. The author of Monte Rouge shouldn’t use his microphones with such mediocrity. Ready to speak, we can only speak until State Security separates us as in the German drama The Lives of Others. Del Llano runs the risk of boring the agents who “attend” him and he makes them suspect that he is up to something more intense than just the second season of a Nicanor. Anyway he’s already a lost case for whom they will never let down their guard, in as much as he defends the “ideal of a democratic socialism that still doesn’t exist.”

or precisely because of it!

[1] The fortress of La Cabaña is posed dramatically on a bluff overlooking the entrance to Havana harbor. It was built by Spain in 1763 and has been the scene of many turns in the history of Cuba as a military installation. Captured by the forces of Che Guevara in the final hours of the Cuban Revolution, La Cabaña became a grim prison and the location of Revolutionary tribunals that ordered the execution of many of the former regime’s operatives. Today it is a tourist destination. The hour of nine ‘o clock is marked every evening by “cañonazo“, the firing of a cannon by men dressed as Spanish colonial soldiers. It is an easy choice as a setting for historical dramas.

[2] A reference to the official magazine of Cuban culture La Jiribilla.

[5] CENPALAB is the Spanish acronym of the National Center for Laboratory Animal Production, a personal project of Fidel Castro that carried out arcane experiments in milk production using at times, cattle breeds imported from Canada at great expense during the sixties and seventies.

[6] Tomas Piard is a director and producer of many films and television shows shown in several countries and has taught in both Spain and Cuba at university levels . Born in Havana in 1948, he has been awarded the Order of Artistic Merit by the Cuban Ministry of Culture.

[7] Roberto Fabelo Cuban painter and illustrator (b. 1951 Camaguey) of international renown , illustrator of Gabriel Marquez’s100 Years of Solitude,whose work sought by collectors, is on display at the Cuban National Museum of Fine Arts.

[8] ICAIC is the Instituto de Arte y Industria Cinematográficos (Institute of the Art and Industry Filmmaking) formed by the Cuban government in the earliest days of the revolution to promote non-commercial cinema that often carried overtly political themes.