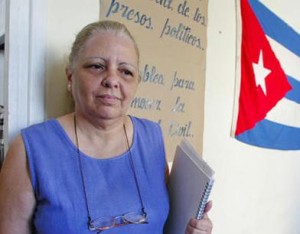 The siege situation against political opposition leader Martha Beatriz Roque Cabello has reached extreme tension.  Today her apartment continues cordoned off by the State Security (political police) and supposed neighbors insult her through a megaphone, calling her “traitor” among other affronts.

In a telephone conversation with this Paper, the pro-Human Rights activist and former prisoner of the so-called Group of 73, exhibited an alarming state of nerves. They do not let her move from there and they do not let anyone pass to visit her. On her door they have placed a photo of Fidel Castro and another with the five Cuban government spies who form part of the Castro campaign.

Neighbors who visited her yesterday at 6 in the afternoon told her that they could not permit counterrevolutionaries to go to her house because that damages the elderly and children.

Martha Beatriz wants to pursue a legal claim on the grounds that what they are doing is unconstitutional.  A lawyer has already interviewed her.

In the midst of her desperation, she has asked that if they do not leave her in peace, they should return her to jail, since, she says, she is a prisoner in her own home.

Today eleven members of the Cuban Community Communicators Network, an independent press agency that she organizes, were arrested.  These reporters were trying to get to her house.  Of the eleven arrested, six were taken to the Guanabacoa township and released. Of the other five nothing is known.

It also transpired that the political opposition leader Arnaldo Ramos Lazurique, recently arrested when he visited Roque Cabello, was freed at the Dragones police station.

What they are doing now to Martha Beatriz brings to mind the sad episodes that occurred in Cuba in 1980, when citizens who were leaving the country forever were persecuted, beaten, stoned, humiliated openly in public and their houses were besieged.