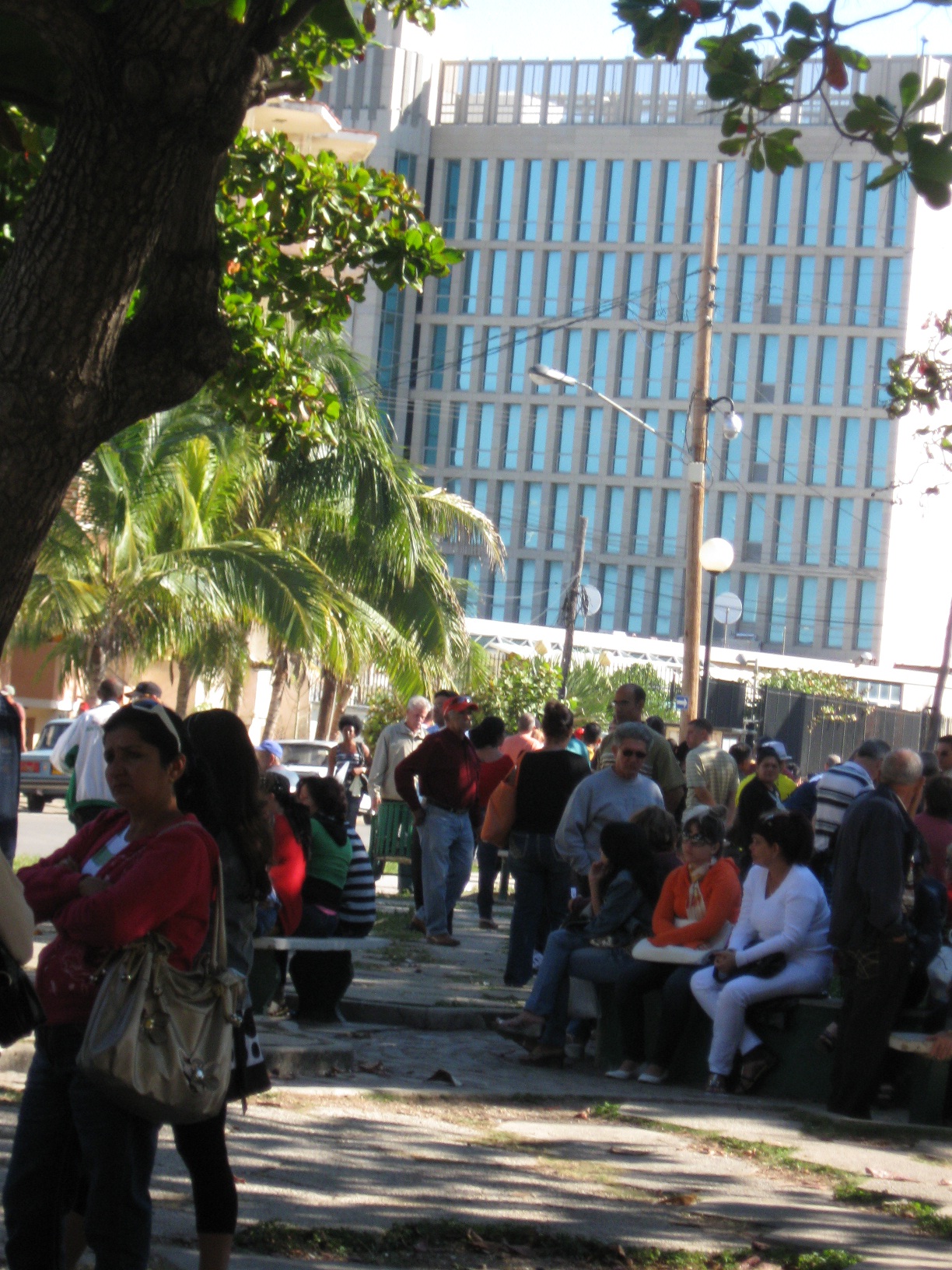 Seven almendrones, fifteen concrete benches, a video camera on every third pole and four policemen on every corner, waiting for the dozens of prospective immigrants who come from Monday to Friday to the triangular park at Calzada and K streets, Vedado, Havana.

The now Parque de las Palomas (Park of the Doves), formerly the Park of the Lamenting, continues to be the anteroom of the impressive capital funeral home, but beyond the tears for the departed, in the faces of those who wait there to enter the nearby United States Interest Section in Havana, there is a mixture of tension and hope that is usually bartered for euphoria or sadness, depending on the outcome of the consular interview.

While waiting for the Cuban employee who organizes the line and accompanies people to the entrance of the most popular — and most surrounded by police — embassy on the island, the potential travelers converse quietly, talk on their cell phones, or ask the next person about the hypothetical questions they will respond to in interviews with the consular officials, who will grant or deny them an entry visa for the United States.

It is difficult to pinpoint which provinces those who are assembled there come from, but many betray their origin by an eastern accent, or by the license plate of the old American car — the almendron — that brings them from Camaguey, Santa Clara, Matanzas, Guines or Pinar del Rio.

The most beautiful girls take little walks along the surrounding streets, as if to say goodbye to Havana’s passersby; while men take the opportunity to have a beer at the open air bars across the street, or snacks in the cafeteria of the basement of the funeral home, depressing compared to the small but competitive Rumba K.

In the little triangular park on Calzada and K there is not talk about politics, only the expectations generated by the desire to depart and the opportunities that the Americans bring to legal immigrants. Only the opponents and independent journalists who wait to get on the Internet in the Lincoln and Roosevelt rooms, talk among themselves about national or international problems.

To some extent, people waiting in the little capital park symbolize a constant drain to Cuba, mainly young people, because the 20,000 visas granted annually by the United States since 1995, mostly through family reunification procedures, invitations from relatives, and the program for political refugees, and the exodus by sea or through Mexico, amounts to over half a million in just three decades.

According to U.S. statistics, 168,000 Cubans were naturalized and 315,000 were able to establish legal residency in the United States; meanwhile 35,000 attempted the voyage to Florida and 38,969 were admitted as refugees in that country on account of political reprisals.

Not even those waiting for a permanent or temporary visa in the park on Calzada and K, nor the bystanders who pass through the site, think about the human tragedy hidden behind the faces of tension and hope.