Danilo Maldonado, known as “El Sexto” has proposed, from his insistent irreverence towards power, a new flag for Cuba, saying it will lead to “new trends in social thinking.” 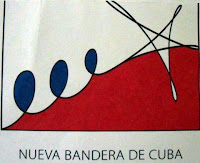 Danilo Maldonado is known among members of the emerging Cuban society as “El Sexto.” He is a young, carefree and happy, and lives in Arroyo Arenas, a small village belonging the municipality of La Lisa in Havana. He belongs to the new generation in Cuba that some would like to define as “The New Man Take Two.” He has filled Havana with graffiti, in which he shows his irreverence towards the authorities, for which he was recently arrested and subsequently freed by the authorities.

According to his explanation, the blue loops of the new flag are the generation that is left behind by the star of freedom. The red background represents all the pain and suffering of the people’s search for freedom. The white is in honor of the fallen and the oppressed and all those who fight for their freedom.

The design was carried out — according to its author — in the carefree and childlike manner of the new trends of social thought, where the sinuous line tracing a diagonal route accentuates the ascending movement as a way to reach the star, freed from the triangle enclosing it.

There are differing opinions about his “juvenile” proposal, its irreverence toward power and patriotic symbols. However, as an excellent friend told me, “he also has rights, therefore, it is the most logical, respects his points of view, and refutes them with logical arguments,” although to be honest, and respecting all points of view, I, in particular, would refute them with historic arguments, always understanding that in order to live in a democracy, with rights an so on, we all must have the power to propose what we believe in, even if we know no one supports us.