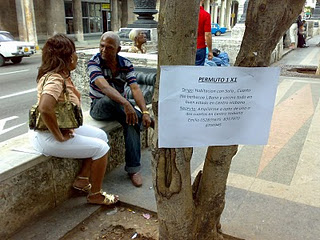 I don’t envy the position of the government at all, even though I also don’t feel pity for any of our rulers. The economic situation in Cuba doesn’t look any better than five years ago. Lifting the prohibitions on what should have never been prohibited, like the legal regulations that for now keep people distracted, are in my opinion a way to gain time, and the confirmation of how wrong the managers of this country have been, the same ones that have been wrong time and time again over the last 50 years, but are still there today.

“We rectify or we sink” — those were the words of the President General, without any signs of their inertia giving way to action. Nothing appears to change, therefore, since we don’t rectify, we sink (that is to say, they sink, we arrived first).

But if we energized the country, we would have to make reforms that encourage the investment of capital and create a safe climate for investors, to start, and other reforms so radical that the government, as we know it and with all its members aboard, would go under.