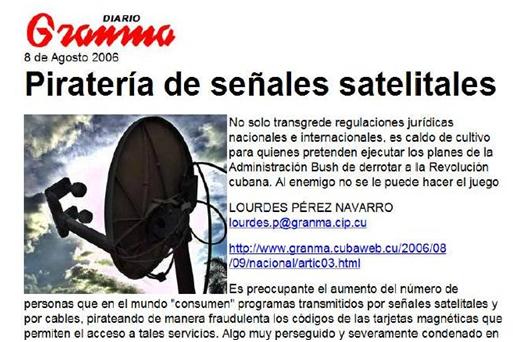 By now we’re used to the newspaper Granma, which excessively highlights one piece of news and omits another. Of course, it’s the official organ of the government and the Communist Party, which owns it and therefore decides what is reported and how. However, it’s difficult to accept the fact that the media is used to propagate the culture of fear and repression.

Looking for information on receiving satellite signals and antennas, I found in the Official Gazette of the Republic, which publishes Cuban laws, one order of the Executive Committee of the Council of Ministers (CECM) and two from the Ministry of Information and Communications (MIC) regulating the issue: Resolutions Nos. 98 and 99 from 1995, and Decree No. 269 of 2000.

The rules consider it a violation to import, manufacture, sell or install equipment, antennas, accessories and other devices for receiving radio communications from space, among which are included television signals, as well as broadcasting them.

The regulations provided for administrative fines of 1000 pesos for individuals and 10 to 20 thousand for companies. However, several newspaper articles from Granma informed the public that the fines were 10 to 20 thousand pesos, without specifying. The figures applied by MIC inspectors, at their discretion, could be for either an individual or a company.

The most characteristic work of Granma was the article entitled “Piracy of Satellite Signals” by the journalist Lourdes Pérez Navarro, in August 2006. The reporter revealed how, inside the island, the illegal broadcasting of foreign television programs was developed, the national standards that they violated and their harsh punishments.

According to the journalist, the customers for the business of broadcasting foreign television signals receive “spaces with an avalanche of commercial propaganda that displays the appearance of capitalism, anti-Cuban messages and even pornography.”

She even gave a political-ideological touch to the matter. “In the case of Cuba, part of the programming that is received in this way contains destabilizing content, which is interventionist, subversive and which calls, increasingly, for carrying out terrorist activities,” she said.

Three years later, through those alien television signals, Cubans watched as Amaury Pérez acknowledged that in Cuba “there is no freedom to have an antenna” and ” … thousands of justifications for not having Internet.”

They picture Pérez saying on Cuban television, “I have an antenna” like he did on the program “To the Point” from the television network Univisión, during his trip to Miami in the last quarter of 2009.

The singer admitted having brought it in from Mexico. “… I installed it even though it was one of the larger ones, not so small. At that time nobody had any idea about the antenna, but I … television for me is very important,” he said. Amaury did not say whether he had permission to use the service. What is certain is that he could see it in Cuba thanks to the illegal reception of signals.

Pérez Navarro claimed that “the broadcasting of satellite programs, technically known as a multipoint distribution system through microwave,” was authorized as a telecommunications service with a limited character.

In other words, in Cuba, only expressly authorized companies can distribute and enjoy the service, people who are given permission by the MIC to be users. The journalist also omitted that the service was coded and intended mainly for tourism and the diplomatic corps.

Pérez Navarro usually covers the “Issues of Law” section in Granma. The article also reported that the piracy of signals “… violates agreed-upon international regulations of usage” and commits “a chain of crimes and administrative violations, which call for severe sentences under various laws and judicial norms.”

She masterfully exposed all the crimes involved in the case. She began with smuggling, which carries penalties of up to 3 years’ imprisonment and fines between 15 and 50 thousand pesos. According to the reporter, tourists and Cubans living abroad were bringing receivers and cards into the country, in violation of customs laws.

“We have detected that another way to own antennas has been the pilfering of such equipment or accessories from persons authorized to provide the service,” she said. In this case, she warned that this was committing the “crime of theft or robbery with force” and another of receiving stolen property, for whoever acquired these things on the black market.

She mentioned other crimes: “illegal economic activities,” by providing the service without a license, aggravated by the use of materials from the black market. “Speculation or monopolization” by purchasing merchandise for resale, and “Damage,” when “electric and telephone poles are disabled or transmission is broken by relocating the cables.”

She also warned that administratively there are “heavy fines and confiscation for the transgressors….The broadcasting of satellite programs requires a license granted by the agency of control and supervision of the Ministry of Information and Communications, an entity that has inspectors with the full authority to impose fines and confiscate equipment when violations are detected.”

In her article she quoted verbatim the contravention referred to in the articles of Decree-Law No 157 of 1995, another of the rules governing the matter, which states that “the amount of the fines to be imposed … shall be determined by the Minister of Information and Communications.” But she distorts the information when she gives the figure for the amount of the fines, as set forth by Resolutions 98 and 99 of that Ministry.

“A fine could be imposed of from 10 to 20 thousand pesos in national currency, or its equivalent at the official exchange rate in convertible currency, besides other administrative confiscation as an additional measure without the right of compensation or any payment,” Pérez Navarro said in her article.

She further reported that “according to Decree Law No. 99, inspectors are empowered to raise said fine up to half of the maximum (10 thousand pesos more), which could mean imposing financial penalties of up to 30 thousand pesos.”

For the finishing touch, she said: “For some, the illegal distribution of satellite television programs has become a form of unjust enrichment, which comes under Legislative Decree 149 of 1994, and they will be deprived by means of confiscation of substantial possessions that do not correspond to their perceived salaries and that they cannot justify.”

Pérez Navarro finished her report stating that “the work of persuasion of the masses” was essential “to eradicate this practice at once to support authorities charged with enforcing regulations for those who with absolute irresponsibility violate the law.”

I confess that my mouth fell open, with Pérez Navarro’s report. That regulatory clarification did not promote the observance of the law, but rather the culture of fear and repression among Cubans. I won’t dedicate even a single sentence to denounce the MIC and its inspectors, for violating the law and defrauding the public. Not to mention that to do its work they violate the citizen’s right to a home, a constitutional right.

The official press knows they have the power to dictate what is right or wrong, what to see, hear and read, and who to obey, through the dissemination of information. However, it doesn’t dare question the politics of exclusion and repression that ithe government implements through its socialist legality, for the people it promised to serve. In other words, it’s the sedative of change.