Public enemy number one for the Cuban State is not longer the Ladies in White, but rather the images captured by the lenses of independent journalists and common citizens, which can show the dark side of our society. 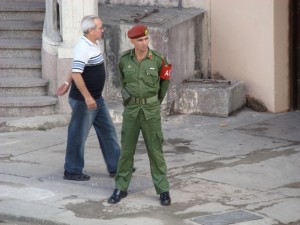 They say that a picture is worth a thousand words. In politics this is doubly true, but for us as independent Cuban journalists, who are accused by the government of being mercenaries, slanderers and of following a script written in Washington, the images are a matter of vital importance.

If we limit ourselves to denouncing the excesses of the government only with words, well they can reply with more words. But if the lenses of our cameras or cellphones catch, in flagrante, a cop abusing a citizen, there are no words that can deny the fact.

The Government knows this reality, and hasn’t stood by with folded arms. Already there is growing hostility, on the part of the supporters of the regime, against those who take pictures that have the potential to belie the official discourse, or that can reflect a reality distinct from the paradise offered by the lenses of the official media.

But most worrying is the notable fear of taking pictures that is beginning to spread among ordinary people, who now see taking photos or videos as something forbidden, punishable, or contrary to the security of the State, even in situations having nothing to do with politics.

Weeks again, in a building located on the Havana street of Porvenir at the corner of Kessel, a man committed suicide by throwing himself off the fourth floor. An even apparently without political implications that can happen anywhere in the world. I happened to be passing by there and joined the curious to watch the deployment of police, ambulances, fire engines.

At the very moment when I took out my cellphone to record some images, a man publicly warned me, “Hey, look out, that’s counterrevolutionary.” Seconds later another man said to me, “Hey, be careful with that.” And a lady, seeming very worried for me, warned, “Son, do not get caught filming.”

These last two phrases, which were accidentally caught on the audio recording of the video, are an example of the fear and paranoia with which our people live, terrorized by someone as harmless and common in the world today as taking a video or photo of a suicide.

The Revolutionary nonsense and paranoia continue as strong as ever. Taking a photo or making a video in Cuba has been turned into a suspicious act, counterrevolutionary; as it was in the ‘60s and ‘70s for a man who had long hair or strange clothes.
The dictatorship knows that images are free, rebellious, not loyal to any government, not members of any party. From there to the paranoia of a regime that doesn’t know how to exist without the total submission of its subjects.

Originally published in Spanish in Cubanet.org