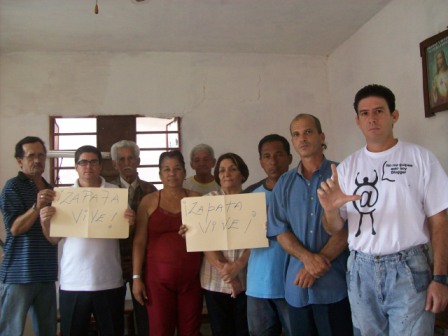 According to statements of Emilio Pérez Correa, activist of the Voices of the Neighborhood project, on the afternoon on Friday the 17th, the President of the People’s Council in Punta Brava cited him urgently to the seat of said institution. Upon presenting himself at the required place, the activist noticed that the call was not a routine chat as the inefficient manager had informed him.

Pérez Correa assured that it was about a dirty trick organized by two groups, political police agents and the People’s Power Delegation. The strategy of the meeting was supported in joint action and persuasion of the democrat that he should disengage himself immediately from the opposition action in the area.

The agent charged with repression waited until the right moment to impose himself on the defenseless activist and later in an arrogant manner identified himself as the local representative of State Security (DG2). Correa, after the prologue, stared at him and insisted he raise his voice because he wasn’t hearing him well. The astute cop performed the interrogation inadvertently before the curious workers, fearing that the matter would spread and come to the ears of the other locals.

Emilio relates that the crushing harangue of the young cop lasted more than a half-hour if at all, leaving for the end the veiled warning that he was risking the sovereignty of the Revolutionary process which wouldn’t stop until he was sentenced.

Correa considers that the temporary arrangement to which he was exposed on Friday by the President of the Peoples’ Council and the Castro regime agent was no more than the beginning of a dirty and abominable campaign against the Citizen Proposal that was recently launched by the Neighborhood Spokespeople.

Promoter of the Voices of the Neighborhood Project