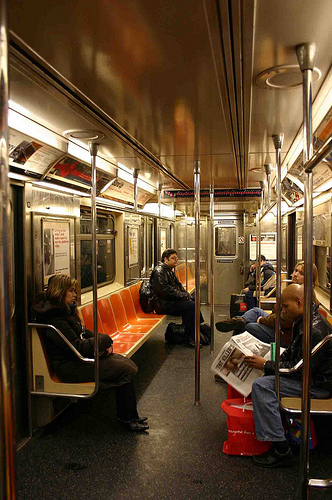 Recurring dreams, dreams in the electrical night of the third rail when the moon is a cutout on New York’s clouds of smoke. Cloud-tunnels of Elizabeth Bishop. Cloud-graffiti of Rene Magritte.

I have dreamed them, daily.

I drop a couple of hours before dawn and dream recurring dreams of a Havana perforated by a maze of subways. Shelters. War of the whole people. Zero option, reconcentration. City hole, nobody is going to survive the system: this the socialist slogan of the assassins. Psycho killers.

National nightmares made of a Gruyère insomnia.

To dream is that. Short circuits. Crossed cables, like those floating supports of the bridges of this miraculous chip called Manhattan.

I spent 40 years in Manhattan. But once, decades ago, on another long island where death wasn’t even a month old, men in green-surgical uniforms began to dig the metro catacombs of my city.

It was an order that came down directly from the Kremlin (for decades Cuba was the 16th republic annexed to the USSR). Only thus might Havana finally have the dream of a subway. And station number zero would be, of course, in the basement of the Plaza of the Revolution.

From that heart of marble and memory the furrows of propaganda would leave the heart, as well as the earthworms dying from the blast of neons and train whistles (the worms are deaf and blind but have a disproportionate political sensibility).

I was a teenager (if you have been a teenager once, you will be one forever). I had all my teeth intact. I also had intact all my desperation. The idea of a life underground attracted and panicked me.

Hence, perhaps, the circular dreams, sitting near the emergency doors and the guide map. *You are here…*

I dream of changing lines at each stop. Lines with letters and colors. It’s like a child’s game (they are very macabre). The trains fly over the rails, weightless despite their human cargo. There are loudspeakers and an exhaustive signalling, that exhausts. It must be very late already. But to wake up now would be to ask the driver snoozing with God.

The doors open and close in half a second, like hysterical eyelids, like puffs of air from a freedom sewer, like the guillotine of a photographic camera. Within and outside the same light. A cold light of high latitudes with voltage to spare, while I stand up (while still seated) and leave and enter the chain of cars that dissolved in the speed in front of me.

The voice of my father (1919-2000) doesn’t stop lecturing: *Stand clear of the closing doors, please*… and I remember then with pleasure and pain his short Republican English, from some sacred texts with pages of glitter printed in CinemaScope: Life, National Geographic, Reader’s Digest.

As a child I came to think that it was logical to speak and write in Spanish, but that people read exclusively in English. Like my dead father. Like me.

Subsurface citizens ask me for money now in this language and, of course, they look so read playing their guitars and pianos and even batteries, that I give them a dollar and they call me “Sir.” I am more destitute than they are and so I can give myself the luxury of giving them all the cash I carry in the pockets of my US Army overcoat (a family donation from Miami).

I have come from Cuba to New York to dream this infinite succession of images that inevitably make me miss my station. The late night spits me out on the icy pavement. I stumble like a sleepwalker. I hurt down to my gloves. I climb a rocky point of Manhattan. I have no shadow, the light is very weak despite being atrocious; this is to be alone and absolutely not need your pity. In any event I feel sorry for you, because you haven’t heard how the magnanimous rumor of the Hudson doesn’t let me sleep (this sentence drained Marti of all his syllables).

My father even scolds me from the MTA loudspeakers. Stand free of the doors that are about to close, he tells me in archaic English (all language is archaic). My father doesn’t prevent me from having an accident, if by mistake the doors open between the stations. My father tells me that I could be trapped between the cars, immobile, and that I can’t go (he knows that in Cuba accidents are on purpose).

Hence my urge to wake up, in part because of the discipline of the loudspeakers.