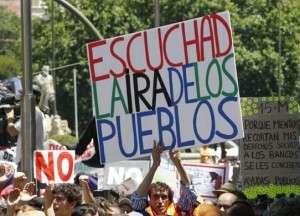 I was struck by the Movement of the Outraged taking over the plazas of the world, like the Old West, without getting into whether or not there are reasons to do it, because I have no details about the situation that led them to take this action. (When such protests happen in Cuba, then I’ll be able to give you the details of these events.)

What I find odd is how you can camp, set up a tent and decide, “I’m staying here.” For Cubans that would be science fiction. Being neither a political scientist or sociologist, barely a scribe who can express a feeling, I applaud any social movement that appeals to the freedom to protest and express their disagreements.

Here we know that the Ladies in White are barely visible from any part of the country, only in passing, in a silent walk, facing a horde of gangsters, mercenary abusers paid by the government, who beat them and drag them right in the street and take them into custody, these women who possess only the weapon of their courage to defend themselves and a gladiolus to awaken good feelings.

In the United States the Outraged carried posters saying they are 99% of the population. Then my doubts emerge: where is the other percentage of the voters, however slight it might be, that went to the polls to elect the current President, or is it the other percentage that the polls say support the administration of Barack Obama.

Then my doubts continue to grow. How were they able to buy all those tents for the campaign in an economy that’s hurting?

If they spend the twenty-four hours hanging around the tents, how do they survive without eating or drinking, assuming they are the most impoverished strata of the society?

Until I saw, through the images, that they started to cook in huge pots, and then I stop worrying about their dying of hunger. But then another question arises, who pays for all this food over the months? How can they print all the propaganda they pass out and put up in the streets? Who hires the designers, photographers, pays for the paper, the printing, the transportation of distribution, the stickers for the walls?

Finally, now they’re making a four-page newspaper with opinion articles, editorials and information about the occupation movement, where they publish their demands which they then distribute, freely, ensuring that they will serve to bring their demands for favorable policies in all corners of the country. Where do they get the money to carry this campaign to all the states of the union?

What’s more, simultaneously, on all the ports on the west coast (I already said it reminded me of old Hollywood movies), the outraged blockaded them to protest corporate greed. And they have a much larger plan, which is to occupy the terminals from Alaska to San Diego, and then expand even to Vancouver in Canada.

When I see all the power they themselves hold it seems to me like they are a big corporation. I can’t stop thinking that someone with money is behind the manipulation of those needs. Someone, who are not the residents and business owners of the places where they’ve installed themselves and who pressure the leaders to honor the citizens’ guarantees, to get the benefits of all this.

In London they have been so consistent that, after several months camped in the middle of the city, the authorities have resorted to legal methods to assess whether those responsible for the acts have to right to remain there or must leave. I suppose, that if they don’t comply with the verdict, the most likely is that they’ll be expelled by force.

This then is where Cuban television airs the incrimination images of the governments that impose order by force. In addition, the London government has accepted that leaders of other countries harangue the masses, exhorting them to remain in that place “to be direct descendants of the Hindu Mahatma Gandhi, the American Martin Luther King or the South African Nelson Mandela.

In Cuba the “outraged” last the time it takes for a cop car to show up on the scene: a few minutes. This is the average time a dissident protest lasts in Cuba. Then they are processes “judicially” for “public disorder,” or for being “allies of the enemies of the Revolution,” “violating the sovereignty of the homeland,” and dissimilar causes that don’t appear in the penal code but that have been invented at their convenience to maintain themselves in power as long as possible.

What is unbearable is to see the cynicism with which the regime criticizes other governments that expel their outraged. My question would be are they preparing the population psychologically for when we come out to protest and they make us disappear, as if by the magic arts, and leave us forgotten in some dark dungeon of their cells, justifying by saying that it happens everywhere, and therefore the Castro brothers will do the same.

I imagine the destination as a book written by someone else, where we are mere characters. When we get to the scene of the protests, it will be the first line of the first paragraph. I am not one of those who harangues and pushes, those who write at the cost of others’ blood and profit from them, but, above all, I prefer to write from my own pain.