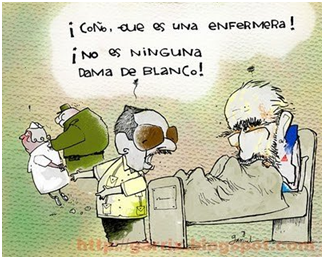 Two years ago, in a work I published about “the comrade who reflects,” I said:

“The elder Castro, in his reflections, goes back in time and rehashes the past, mainly the 60s and 70s, which suggests that ‘the providential man’ of the Cuban revolution, age 81, is showing symptoms of senile dementia.

“Easily recalling events of long ago as if reliving them is a manifestation of the disease, which attacks the elderly. The situation is being exploited to create a new history of the Leader, now from his personal point of view. Expect soon a literary work about this.”

On August 2, 2010, “former president” Fidel Castro released his book Strategic Victory, about the guerrilla fighting in the summer of 1958. The book, 896 pages long, chronicles the battle of the Rebel Army in the Sierra Maestra to stop the offensive of the armed forces of Batista, according to the voice of the “leader and strategist” of these events, as described on Cuban television.

Text of the cartoon:
Coño, that’s a nurse! It’s not a Lady in White!