Section 21, as this Department of State Security is known, works to track the political activities of the opposition in the Cuban archipelago.  They are the omnipotent masters of the destinies of those who seek democracy and freedom. 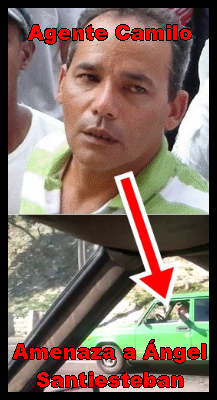 In my case, it was the official Camilo, the same one who on November 8th, 2012, after a beating in plain view of the public, told me that they were putting me in jail for 5 years [before Angel’s trial was concluded].

Three months later, I went to prison, convicted by a rigged jury, where they didn’t show a single bit of evidence against me, except that joke by the lieutenant colonel graphologist, who acted as something like a fortune-teller and said that given “the height and inclination of my handwriting*,” I was guilty. Of no value were the five witnesses I presented who corroborated my statement. Not even justice is an impediment to the designs of the political police.

Since I entered prison, it has been the State Security officials who have manipulated my incarceration. The prison officials have always let me know that “they are there to keep me enclosed,” but that they have no rights over my person.

If I fall ill, whether they are to approve or not the pass** that is provided every sixty days for those serving less than 5 years, transfers, disciplinary measures, or for any other motive, they are to call Section 21 and there they will be instructed as to what is to be done with me.

Of course, it was those authorities in that very same Section 21 who gave the go-ahead for my transfer from the Valle Grande prison to La Lima camp, in keeping with my sentence (as I am not supposed to be in prison); from there to prison #1580 (in a new violation of my rights); later, to the Lawton settlement; and now, to the Guardafronteras (Border Patrol) unit, where I am currently held.

According to the prison officials, they are supposed to consult with the officials of Section 21 at each step in my process. They have retained the appeal of my case, delivered at the Ministry of Justice on July 4, 2013, for more than a year. This is because if justice were to be applied, they would have to release me immediately, as requested by my attorney, given my proven innocence. Instead, they gather an extensive list of flagrant violations that, as my defense attorney at the time said after the trial, left me “in a state of utter defenselessness.”

I have stated before that murderers, drug traffickers, pederasts, and others who have committed grave crimes, are treated with the utmost mercy compared to the stance the authorities have taken toward my person, for they treat me according to the strictest of their laws.

At this time they have me cloistered inside a Border Patrol Troops unit, in a small apartment with two rooms and a bath. It is completely barred and there is a guard at the door who records in a log the hour at which I rise, if I take exercise, if I write, etc.

In addition, this small apartment made into a prison cell includes a patio that, in my honor, was completely enclosed in bars – even on the roof – just hours before they decided to transfer me to this place.

However, even while bearing every suffering that their impediments cause, I feel proud to be treated thus. Not even the worst of their measures against me will cause me to back down from my struggle for a more just country — a country in which free expression against the politics laid down by the powers-that-be will not be cause for imprisonment.

*A handwriting expert literally testified at Angel’s trial that his “too slanted” handwriting proved he was a guilty person.

**In an earlier post Angel explained the Cuban penal system that allows prisoners with shorter sentences to leave prison every so many days for extended (overnight) home visits. He was granted one of these passes when he was in the Lawton Settlement, a work camp, but future passes were withheld.