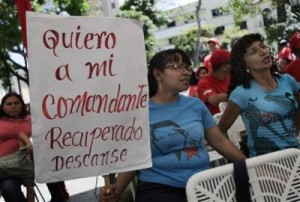 When some days ago the Venezuelan chancellor Nicolás Maduro read a plain official note, announcing that President Hugo Chávez Frías, aged 54, would be undergoing surgery in the lower abdomen, few in Cuba paid attention.

Maduro’s message was issued in Havana, during a bilateral meeting as part of the strategic alliance signed by Cuba and Venezuela — members of the ALBA, a mercantile, financial and political alliance in which Bolivia, Ecuador, and Nicaragua participate.

The information about Chávez’s surgery has been manipulated with tweezers by the State media, almost as if it were a State secret; a matter of national security.

Lacking a free and transparent press, the rumors ran from one extreme to the other. All were fables and whispers. Politicians and local impresarios must be pulling their hair with the bad news about the colonel from Barinas. To the average Cuban his health doesn’t matter too much. What worries them are the consequences that a fatal end would bring.

When Benito, age 49, factory worker, learned that Chávez would be operated on, he gave it no importance. “By his age and because he seemed like a healthy man. But it seems that the man is fucked. I know because of the news I heard on Radio Martí and from people who illegally watch television from Miami by the ‘antenna’ (satellite connection). If he disappears from the ‘air’ (he dies), he’d bring us a million internal problems, from oil right down to the money that resolves the thousands of Cuban co-ops in Venezuela”, he expressed, alarmed.

From there come the shots of the common citizens. It is calculated that more than 30,000 Cubans lend their services in Venezuela, like doctors, sports trainers, engineers, coaches, and military men. In practice, this collaboration has turned into an ‘industry’ that permits the government to invest petrodollars – a deal that fattens the national GDP. And on the good health of Chávez depends all those thousands of Cubans in Venezuela continuing to bring home dollars and merchandise.

For every doctor who works in Venezuela, his family in Cuba receives around 60 dollars monthly. A pittance. But with that monthly payment, four people can eat hot meals once a day. And when the doctor returns after two years of service, they load him or her up with garbage for their families and to nourish the little clothing stalls staffed by the self-employed throughout the country.

Besides, the ‘internationalists’, as those who cooperate are called, can choose their houses. A true privilege: in 75% of the housing in Cuba three different generations reside under the same roof and 63% of the housing is in fair or poor shape.

For all these advantages, for simple Cubans the death of the strong man from Caracas would strip even more from the worthless national economy. They aren’t walking far from the truth. In the last 52 years, Cuba has lived on its belly, maintained by other nations and brushing half the world’s teeth. Doubtlessly, a change of government in Venezuela would be a catastrophe with dramatic overtones.

Raúl Castro knows it, too. The loquacious Venezuelan President won his power by votes. And those same elections could send him back to Barinas. Because of this, Castro II intends to make his slow and methodical reforms, which would permit him to tone down the consequences in case of something unforeseen in Venezuela.

The governors of Cuba aren’t waiting for the cart to get in the way. Precisely now, when the olive green impresarios tried to make the economy move on its own, with new investments and elevated consumption of petroleum. It would be to return to the most critical stage of the “special period”. Like getting in the time machine, but going backwards.

That the horse should sink halfway through the puddle wasn’t in the contingency plans of the meticulous wise men of the regime, dedicated to plan variances and political strategies. But if changes occur in Venezuela, Cuba would be left adrift.

To the Havaneros, who generally aren’t used to being interested in political events, the news coming from the south has them sitting up and paying attention. Ernesto, aged 54, a shaman, doesn’t even want to think about it. “Two of my sons are working in Venezuela, and I have eleven ‘adoptees’ (from santería) there. The future of my children depends on the dollars they can bring home”, he says. And adds: “No religious brother has been able to confirm what’s been said, that Chávez was coming to Cuba to make himself a saint (‘un Ifá’)”.

The first rumors were reassuring about health problems. Chávez should make himself a saint. “I hope that’s the motive. If it were true that he has a terminal cancer, then we won’t see blacks”, says Oscar, age 35, a party militant.

More drastic is René, age 69, palero (practitioner of the Palo or Rules of the Congo). “I always knew that Fidel was going to pull Chávez through his disgrace. Castro has very strong protectors. And those he usually holds up, or who die first, or fall into disgrace”.

For now, Fidel Castro has company in the hospital.