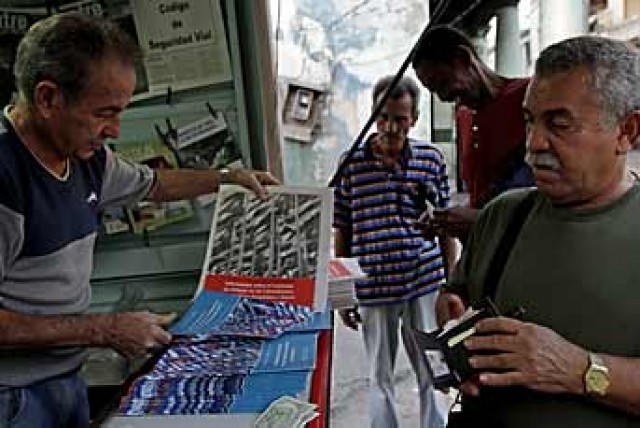 The streets of the island were full of comments after, around the middle of the month, the government brought out a paper with the debates of the congress, and a leaflet with the ideas that were passed, confirming that Cubans will be able to sell their houses and cars, and in the future to travel as tourists.

In the 60’s the revolutionary government, for political reasons, empowered the Ministry of the Interior to decide which Cubans could enter and leave the island. In 50 years the motives for emigrating have changed, but the controls and the bureaucracy involved haven’t.

At the moment Cubans cannot make international trips as tourists. The Law on Migration only allows people to leave Cuba on official business or to visit friends and family. Those who travel for private reasons have to show a letter of invitation.

“To consider a policy which permits Cubans resident in the country to travel abroad as tourists”, says the final line of decision number 265, passed in the communist congress, and intended to be carried out during the current five year period, which began in January 2011.

“Pack of lies, imagine waiting till 2015 to hear the results of the study, that there will be no entry or exit permits”, said Juan after buying the pamphlet. This man, about 40, wanted to check for himself the rumours that began to circulate the second week of May, when it went on sale.

The document must be applied for and issued in the country of residence of the inviting person and must be legalised through the consulates. It is valid for one year and is issued to a single invited person, for a single journey.

Its removal means the disappearance of one of the most troublesome pieces of bureaucracy which Cubans have to pay for in order to travel, and, as well as the visa of the country they want to visit, they also need to get an entry and exit permit.

The problem then would be that the State would give an entry permit to someone who, under whatever conditions, would be a potential emigrant. Ecuador abolished the visa requirement for Cuba. Since then thousands of Cubans, legally or illegally, are looking to legalise their situation in that country.

Undoubtedly it will still take a lot to abolish the system of permits and discretionary powers which the government has to issue them. In these proposals there is a lack of precision — the word freedom is also missing — and, whatever it says, few Cubans are hopeful of travelling as tourists some day.