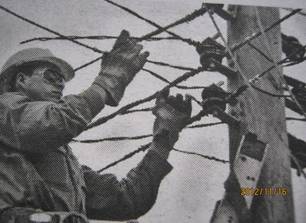 The recovery of the electrical system in the eastern provinces, destroyed by Hurricane Sandy, has been the subject of headlines, articles and commentaries in the various governmental media outlets, pondering the arduous and magnificent work of the Union Electric personnel participating in it. It issomething fair and that must be done, now that they deserve everyone’s appreciation, independently of the accompanying fanfare and of the official flags of the contingents, as if they were setting off to war, but all that must be understood as excesses of our tropical socialism.

If Union Electric is capable of working this way in extreme situations, why not do it in a similar way three-hundred-sixty-five days a year? No one escapes from the continuous outages of ten and more hours, the surprise service interruptions because of pruning (in reality destruction) of trees, maintenance, repairs, changes of line poles, etc., achieved with low productivity and at a slow pace, in any geographical part of the country.

Nor from the rupture of domestic appliances by voltage surges that destroy even the surge protectors. Add to this the poor information offered to clients, limited to the well known: extended maintenance, pruning, extensions, and repairs with no established deadlines. These effects, which no one compensates, besides affecting the citizens in their homes, also affect private businesses, causing sensitive losses. I exclude the State because, when there are outages, their employees are partying because of not having to work.

Sometimes it is tedious to compare with the past but, when the Cuban Electric Company, subsidiary of Electric Bonds & Share with Cuban shareholders, existed, outages were unknown and rarely (except in situations of natural disasters) did we hear about repairs, maintenance and tree trimming because the electrical service was not suspended: apparently these jobs were executed with hot lines.

It is true that the service then did not cover the whole country, but it was in constant development and, without doubt, would have managed it with the passage of the years. The blame for existing problems will be placed, as always, on the blockade (embargo), but in reality it is a problem of organization and stimulation of labor. The difference between an extreme situation and the usual one demonstrates it: it is not the same to work ten or fifteen days at full speed with all the resources and motivated, as it is to do it 365 days a year, without motivation, with miserable salaries and lacking the necessary means.