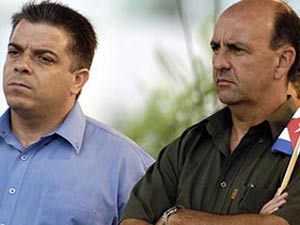 Reading Carlos Alberto Montaner’s book, Conversation at the funeral of the Comandante. What will happen after the death of Fidel Castro?, from the first pages I could recognize a reality that was predicted by the author several years before it happened.

Who could have predicted that Carlos Lage — the “majordomo” of the Palace who, from his youth, devoted his best efforts to comply meekly with every injustice and Machiavellian policy that occurred to Fidel Castro — would be ousted in such a humiliating and burlesque way? Only an expert on the psychology and ideology of a dictator, like Montaner, could almost prophesy so great a madness without having to wait for the burial of “leader.”

Just months after Raul Castro came to power, the prophecy of the author was fulfilled, and Lage was unceremoniously dismissed from the government elite. And weeks later, in the heat of the day, over 90 degrees, I saw this character — someone might say “thrown to the lions” — walking, almost choking, through Red Square in Vibora (notice the irony of the name of the place). He was just one of the crowd. His elegant and expensive brand-name shirt completely sweaty… I still can’t decide whether it was pity or satisfaction I felt at that evaporated “grain of salt.”

I’ve always wondered how Fidel Castro forgot some of the young people he himself conceived, and whom later he couldn’t stand. Some were children when they came into to his hands and, like a potter, he shaped them in his image and likeness. They turned out hideous, lacking decorum, lacking humanity, and, right before his eyes, they looked so much like him that they became dangerous to him. The twin brothers Tony and Patricio La Guardia, in 1959 they were young boys not even twenty. He made them what they were, efficient Generals of his elite corps. And then he shot one of them and sent the other to prison for years. What could the biological parents of Tony and Patricio think of Fidel Castro, in whom they confided their sons, healthy in mind and heart? How much pain have these parents survived to see the death of one and to face the humiliating imprisonment of the other?

That reminds me of the anecdote told by Comandante Benigno, of the young boy of 14 that a peasant couple entrusted to Fidel on a night when he visited their hut, there in the deepest forest of the Sierra Maestra. “We give him to you,” said this elderly couple, “because he is our only treasure, we conceived him in our old age and do not want Batista’s army to force him into service, it would kill us.” But perhaps better the devil you know than the devil you don’t.

Fidel entrusted the young man to Camilo Cienfuegos who had been with him that night with the elderly couple, and of course with the young man. Shortly afterward, the teenager stole a can of condensed milk one morning ]. When he discovered it, Camilo sent a message to Fidel asking advice on what punishment to impose. And Fidel replied emphatically: “Shoot him.” Camilo, surprised, sent another message back saying that it was the youngster offered up by the elderly couple who stole a can of condensed milk. And Fidel, with the icy impulse that characterizes him, again answered, “I already told you to shoot him.”

The questions are my great torture because I always want to understand others, though I do not share their feelings or their actions. But was it not an act of cowardice for Camilo Cienfuegos to execute the order when he did not share the view, especially since we’re talking about the life of a teenager? And in contrast, Benigno says, Comandante Camilo hid in the toilet so as to not witness the shooting. Perhaps the place he found at that time was the most suitable to his feelings.

But back to the book of prophecies of Carlos Alberto Montaner. To be cautious, he predicted that once Fidel Castro was gone, the “Group Supporting the Comandante,” would have to make an alliance to survive, as their political weight would vanish because they were barely anchored in the institutions.

And what happened with the young “Taliban”?

Raul Castro, without delay in his brother’s absence, took steps against this political “alliance,” caught them one by one and unceremoniously deposed and expelled them like stones in his shoe: Felipe Pérez Roque, Otto Rivera, Hassan Pérez, Juan Contino Aslan and Carlos Manuel Valenciaga. And as he couldn’t ignore Abel Prieto, the Minister of Culture, he suppressed his political power but kept him on as a “lion tamer” to face up to the conflict-ridden and volatile intellectual sector, perhaps until he finds the right person to replace him. And if we look back, we understand that it has been a process of continual political defecation: José Luis Rodriguez, sentenced to several years in prison, Roberto Robaina, who came from the Federation of University Students (FEU) from before the Revolution and the Young Communist Union (UJC) after, and who was the former Minister of Foreign Affairs. Humberto Rodriguez, President of the Cuban Institute of Sports, Physical Education and Recreation (INDER). General Abrantes, whose death in prison remains a mystery to be elucidated. And we mustn’t forget General Ochoa, “Hero of Cuba,” whom he also made bite the bullet in front of the firing squad in 1989.

In the end, their entourages have been no more than puppets who expose the image and sacrifice their bodies, their hands implementing the designs of the brain that drives them, the hand that really frames the policy and reaps the benefits.

It is so true that those names, for years, occupied the spaces of the official media, and now no one remembers them. This is the payment for being part of the Government, without making their opinions known, much less managing to prevail against any mistaken speculation of the Comandante, or other member of the sacred sphere of the Government, and whom the people would identify as defenders of their way of life. Just following orders, never achieving their political dreams, save to suck from the teat of power and accept one hundred percent the Maximum Leader’s every suggestion. History will gather up, at some point, this pack of Taliban as part of the diabolical mechanism of the prevailing system on the Island.

What is left of those old Comandantes?

As my neighbor would say, “Just their helmets and their bad ideas.” Or, as Carlos Alberto Montaner writes in his book, “Elderly and inform, tied to the ancient legend of the Sierra Maestra.” Some of them, those who are still breathing in this accepted death, resigned to consume the benefits of the Revolution, attend the official events to present a false image of unity. Instead, they continue to live like millionaires in a country plunged into the greatest poverty of its history. Before the eyes of the people they live in their sumptuous homes which, by the way, they didn’t even have the decency to build themselves, they sail on their recreational yachts, buy in the international market with the people’s money, or with money confiscated from the drug traffickers who entered Cuban waters. Many of these characters squander the resources of the nation to please ex-wives or former intimate partners.

The hands of Fidel Castro, of the potter he claimed to be, contaminated the clay with blood, and those young people he imagined shaping, in some way he deformed. Under his distorted and putrid aegis he never managed to become a teacher and role model for anyone. All he can expect in future years is to be used as a symbol of death and misery.

His egotism and his caudillo’s cunning made him forget the true history, not that which he has tried to distort and manipulate at will, but the voice of the people by whom he will ultimately be judged and who will write the pages of the books of the future, though, for now, the fear before the terror he imposes prevents these people from screaming TYRANT.