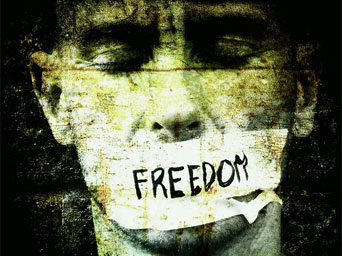 Dora Leonor Mesa, 24 April 2015 — The photos of Cuban President Raúl Castro conversing with his U.S. counterpart Barack Obama during the Seventh Summit of the Americas are still appearing on the principal pages of the world’s most important newspapers.

Images of Cuban volunteers who, risking their lives, went to fight the fatal Ebola virus in Africa, those who help disaster victims in Haiti and other places, i.e. Brazil, Pakistan, Chile, etc., have also been given prime placement in the broadcast media and the most prestigious news agencies.

In Panama, during the forums of the Seventh Summit of the Americas, Cuban men and women of the State-sponsored civil society also appeared on the front pages of every known communication medium in the world.

These fervent social actors achieved unqualified success in defending their ideas. They took part in public acts wherein they expressed their opinions with yelling, vulgarities, threats and physical violence. The devotion of these social activists is so intense that they are holier than His Holiness, Pope Francis, himself.

To be fair, it must be clarified that in Panama they behaved moderately compared with how, back home, they treat human rights defenders and the Ladies in White with their deadly gladioli.

Thanks to the show put on by the State-sponsored civil society, which the official Cuban press calls “historic participation,” millions of concerned spectators around the world discovered that the “mercenaries in the service of the Empire” are respectable Cuban citizens, besieged by raging fanatics masked as intellectuals, journalists, leaders, students….

According the newspaper, Juventud Rebelde, (1) Cuba made many contributions to the forums for young people, being that there were no mercenaries (or, “Cubans,” it is understood) present.

At the Democratic Governance and Citizen Participation meeting at the Civil Society Forum, the Cuban delegation from the governmental civil society retreated because of the presence of mercenaries. In reality, this was an excellent tactic to hide their renown ignorance of debate subjects. The sociological theories of the Frankfurt School, with Habermas at the head, are a taboo subject. The Karl Marx taught in the universities is a free version of the Theories of Conflict and so it is with many other theories and books that are not even mentioned.

The Pot Calling the Kettle Black

There are various articles published in the official Cuban press describing what comprises the real Cuban civil society (assuming a state concept).  Regardless of the substantial theoretical contributions that these make to the social sciences, the very Constitution of the Republic of Cuba decrees: The Cuban nation is not under the Rule of Law.

It looks like a case of the pot calling the kettle black, given that the highest Cuban court, the Supreme Tribunal, receives “instructions” from the Council of States, other institutions, personages, etc. This is no surprise to us who live on the Island. We remain immutable if state entities and even certain very special individuals make a mockery, with total impunity, of the rulings and jurisprudence of the Supreme Tribunal. For the incredulous, it will be enough to confirm this reality by asking various individuals, reading the Cuban press, and watching national television.

Despite what happens in Cuba, the disparagement of our heroes of today and yesterday should stop. Nobody, NOBODY, has the right to defame, with self-promoting intentions, the generous and committed character of any Cuban man or woman; for we belong to one nation, even if the group we defend is offensive to others.

At this time, some of the “elect” among the participants in the forums of the Seventh Summit, are exclaiming on the Internet, in the newspapers, and on television programs:

“Oh, we were not violent! This is a manipulation of the facts by the powerful!”

Please! Save the hypocrisy. Do they really think that the whole world is like Cuba, burdened with 19th-century technology and information? (3)

The provided “cuban government-style” civil society, since its arrival in Panama, was an international embarrassment for the nation, dishonoring our heroes and luminaries of yesterday and today.

Civil Society or Troglodytes Emerging from their Caves?

They should be ashamed!

To be judged as traitors is the least they deserve.

Article 90. Attributes of the Council of State are:

h) impart instructions of a general character to the tribunals, via the Council of Government of the People’s Supreme Tribunal;

i) impart instructions to the General Prosecutor of the Republic;

Article 121. The tribunals constitute a system of state organs, structured with functional independence from any another, and hierarchically subordinate to the National Assembly of the People’s Power, and the Council of State…

Article 128. The General Prosecutor of the Republic comprises an organic unit subordinate only to the National Assembly of the People’s Power, and the Council of State.

Article 137. This Constitution can be reformed only by the National Assembly of the People’s Power via an agreement adopted in a roll-call vote, by a majority no less than two-thirds of the total number of members, except in what pertains to the political, social and economic system, whose character is irrevocably established in Chapter I, Article 3….

Article 3. Socialism and the political and social revolutionary system established in this Constitution – proven through years of heroic resistance in the face of aggressions of all types and the economic war waged by the governments of the most mighty imperialist power that has ever existed, and having demonstrated its capacity to transform the country and create a wholly new and just society – is irrevocable, and Cuba will never again return to capitalism.

In a list of 157 countries, Cuba was ranked 106 in the Development Indicators drawn up by the International Telecommunications Union (ITU) in 2012. Cuba, with an average of 2.77, is the third country with the lowest information and communication technologies – ICT – development  index  (IDI) in Latin America, exceeded only by Honduras and Nicaragua. The ITU ranking is weighed-down – in Cuba’s case notably so – by the low level of Internet access throughout the country, which is one of the sub-indicators in the IDI. Cuba placed at 151, the fifth worst placement in the ranking.