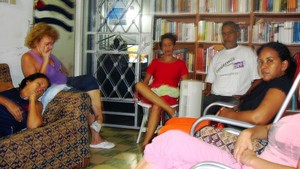 Monday, September 17th marked the first week of a hunger strike carried out by the well-known economist and opposition figure Martha Beatriz Roque Cabello, 67 years old, “to demand the freedom of political prisoner Jorge Vázquez Chaviano and an attempt to force the government of Raúl Castro to comply with mediocre current legislation”, she tells me.

The veteran dissident was in a delicate state of health. “She has suffered various blood sugar problems and on Friday the 13th she suffered a respiratory blockage”, said Idania Yanes Contreras, president of the Central Opposition Coalition and spokeswoman of the group of 6 dissidents on hunger strike in Martha Beatriz’s small apartment.

It has been a chain reaction. There were 30 opposition figures found going without food in various provinces of the nation. For decades, hunger strikes have formed part of the dissent’s battle strategy against the olive green regimen. It has had its cost in human lives.

Since 1966, when the political prisoner Roberto López Chávez died in the Modelo Prison on Isla de Pinos, various opposition figures have died as a consequence of hunger strikes. Among the most talked-about is that of student leader Pedro Luis Boitel, who died the 25th of May of 1972 in the Havana prison Castillo del Príncipe, after 53 days without eating food. Orlando Zapata Tamayo, one of the accused of the Black Spring, lost his life due to a hunger strike. His death, the 24th of February of 2010, was what triggered the government to negotiate the release and exile of almost a hundred political prisoners with the Catholic church and the Spanish government.

On repeated occasions, the government has declared that it will not yield to the petitions of the dissidents. Many opposition figures, like Martha Beatriz, feel impotent. “It is one of the few paths that we have to show our indignation. The world already sees as somewhat normal the destructive acts of the Cuban regime against dissent. It has all become routine”, she emphasizes, and makes a brief recount of the events. “In these two years, the arbitrary detentions, the acts of repudiation, the harassment and physical aggressions have gone up considerably. We demand respect”, she says in a very low voice.

She is laid out on a single bed illuminated by various candles. “Electric light bothers me. I get nausea and very cold feet. I drink water every now and then and chew little slivers of ice. That gives me relief”, she clarifies. I want to take a picture of her. She says no: “Iván, I wouldn’t let anyone else but you, but I don’t want pictures taken of me in this state.” Martha is very vain and has always liked to get herself ready.

At her bedside rests a worn leather Bible. The hardened dissident has been jailed on two occasions. In 1997 she served three years along with Vladimiro Roca Antúnez, Félix Bonne Carcassé and René Gómez Manzano for issuing the document The Fatherland Belongs to Everyone. Six years later, in March of 2003, she was the only woman who served jail time among the group of 75 opposition figures arrested. She was freed in 2005 on conditional parole due to her deteriorated health. In this hunger strike, Martha is accompanied by five members of the Cuban Community Communicators’ Network.

They are Yadira Rodríguez, Yasmany Nicles, Rosa María Naranjo, Fermín Zamora and Ibis Rodríguez. Yadira and Yasmany, a married couple, began the strike seeking a response on the authorities’ part about their house fire on the 21st of April of 2012 in the Vista Hermosa neighborhood of San Miguel del Padrón. According to Yasmany, the Interior Ministry’s experts arrived at the conclusion that the fire had been set. The couple accuses the Special Services of the act.

In Roque Cabello’s small apartment, in the Santos Suárez district, there is a constant bustle. Some neighbors ask about the strikers’ state of health. Two opposition members sleep on a sheet laid out on the floor. A young striker stays stretched out on the sofa. Idania Yanez takes the continuous telephone calls.

Nobody in the room seems to pay attention to the television, which plays a Discovery Channel documentary. One week after beginning the hunger strike, the dissidents are not there to watch television. Their bodies already begin to weaken. Fitful sleep or the reading of a book turn out to be the best pastimes. In the hallway of the building, right before the front door of Martha Beatriz’s apartment, a large painting of Fidel Castro appears to observe it all.

“It is one of the ironies of State Security. They hung the portrait years ago, saying that the hallway is a common area of the property”, states Idania. The dissidents maintain that in the adjoining apartment an intelligence command post is running. “At all hours they try to bother us. Music too loud. Castro speeches, in short, anything at all to irritate us”, Yasmany says.

This collective hunger strike, undertaken by 30 peaceful opposition members, does not guarantee that the regime will hear their claims. And the worst is that it could have fatal consequences for their lives. They know it. And they face up to it.

Note: A few hours after this work was written, State Security freed the political prisoner Jorge Vázquez Chaviano and the opposition members agreed to put an end to their hunger strike. Meanwhile, at Zoé Valdés’s blog and other websites, the open letter that Tania Quintero directed from exile in Switzerland to her friend, the renowned dissident Martha Beatriz Roque Cabello, was making its rounds.