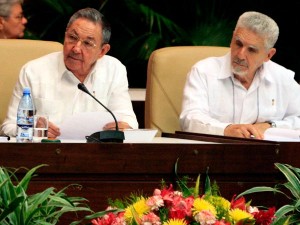 The first change in the Cuban mandarins at the Communist Party 6th Congress was in the look. If, in the prior congress, in 1997, the hierarchy wore the hot and intimidating olive green uniform, now the fashion of those who led the sessions and debates was the typical guayabera.

White, as well. As if to transmit purity and political transparency. Raul Castro, and his staff on combat alert intent on rescuing the dying local economy, sat at the presidential table showing impeccable guayaberas.

And says before, during the courtesy visit of the ex-president Jimmy Carter, both the American and his host exhibited this most Cuban fashion. The guayabera sits better on the General than the military uniform.

This shirt has a history. I wrote about it in “From the olive green to the guayabera” a post published in December 2010 in Tania Quintero’s blog. Anecdotes aside, Cubans have always like the guayabera for its comfort and freshness.

Among those who resisted throwing it into the trunk of memories were the peasants, who continued wearing it for weddings, baptisms and parties.

Castro II wants to return to Cuban traditions in dress. On countless occasions, his brother Fidel wore suits, well cut and with elegant ties. On foreign visits Raul has also dressed in suits from good tailors. The most striking was a white one, which he wore in July 2009 during a brief stay in Salvador de Bahia, Brazil.

But from October 6, 2010, when a decree declared the guayabera to be official dress, Castro II makes a point of it. In the 6th Congress, if there was something that marked a difference from the five previous ones, it was the wearing of guayaberas. Especially all white ones.