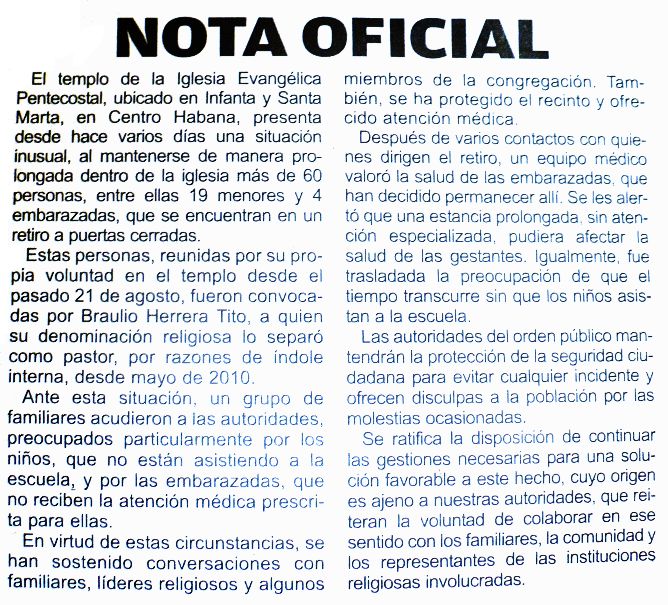 The temple of the Evangelical Pentecostal Church, located at Infanta and Santa Marta in Central Havana, displays an unusual situation since a few days ago, in that more than 60 people, among them 19 minors and 4 pregnant women, have remained in the church for a lengthy period of time, found in withdrawal behind closed doors.

These people, reunited on their own volition in the temple since this past August 21st, were summoned by Braulio Herrera Tito, whose religious denomination removed him as a pastor since May 2010 for reasons of an internal nature.

In light of this situation, a group of family members reached out to the authorities, particularly worried about the children, who are not attending school, and for the pregnant women, who do not receive the medical attention prescribed for them.

By virtue of these circumstances, conversations have been held with family members, religious leaders and some members of the congregation. The premises have also been protected and people provided with medical attention.

After various contacts with those directing the site, a medical team assessed the health of the women, who have decided to remain on site. Medics alerted them that a prolonged stay, without specialized attention, could affect the health of the expectant mothers. They expressed equal worry about time passing without the children attending school.

The public order authorities will maintain protection of the citizens’ security to avoid any incidents and offer apologies to the population for troubles caused by the situation.

The order has been confirmed to continue the necessary procedures for a favorable solution to this situation, whose origin is beyond our authorities, who reiterate the desire to collaborate with the family members, the community and the representatives of the religious institutions involved.