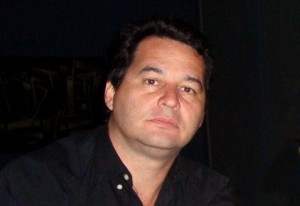 How can an admired writer be turned into an alleged and persecuted anti-social? How can one pass from being a creator of stories, a prize-winner, read, respected, cited, to become part of the social evils which, according to the all-powerful authority, it is necessary to mercilessly eradicate?

The answer is very simple: Live in Cuba. And distance yourself from the powers-that-be.

When I met Ángel Santiesteban, some seven years ago, I still hadn’t read a single one of his stories. Later I would regret it, on looking over the most overwhelming volume of stories in recent Cuban literature: The Children Nobody Wanted, that kind of stinking garbage where a phenomenal narrator tells stories of convicts, cattle killers, prostitutes, rafters and crazed war veterans.

Even before the iron friendship that binds us both, a reality about his work seemed certain to me: with just two books of stories known to the Cuban public — published against the will of the publishing industry: The Children Nobody Wanted, winner of the Alego Carpentier Prize, and Blessed Are Those Who Mourn which brought home the Casa De Las Americas Prize, turned Angel Santiesteban into an author fiercely pursued by the Island’s readers.

While the works of the cadaverous National Literature Awards gather dust on the shelves, the books of Santiesteban are undetectable ghosts: there is not a single one in any bookstore. They have all been bought or stolen from the libraries.

I think of this now that the name of Angel Santiesteban has become a bad word in trembling Cuban literary circles, now that he has been stripped of the social status his voice once earned him. I think of this now that the anxieties of an author with so much to shout about found freedom in a personal blog, and who now has a 15-year prison sentence ever more dangerously hanging over him.

Did he imagine that one day it would come to this, that the unbridgeable distance between him and the dictatorial government that rules the fates of his Island would turn him into a cursed writer and citizen?

“Someone warned me, before I started the blog, that it could cause me a great deal of adversity,” he confessed to me. “I thought it would be on the order of censorship, relegated to the cultural media, which I was already familiar with. But I never thought they would manipulate people close to me, that they would invent such a long and perverse script to discredit me and leave me all alone.”

Feeding the grudges of an old marital relationship, State Security showed signs of an imagination almost as fertile as the writer’s: today Ángel Santiesteban is accused of rape, theft, and attempted murder of his ex-wife, charges that carry a penalty of more than 50 years in prison.

“They have been lenient with me,” Angel says sarcastically, “proposing that I accept nothing more than 15 years behind bars.”

They constructed the story without evidence, without witnesses, without definitive facts: that’s the least of it. In the same country where you can be shot for your beliefs; where 30-year sentences are handed out for writing on typewriters, today it is possible for a valuable writer to be accused of murder, rape and theft without proof. And the worst of it: to be made to pay for it.

“The last time I was invited to the Book Fair as a valued writer was in 2008,” Angel told me, and my memories surge, unavoidable: during those meetings he was in my city more than once. “When I spent three days in Moron, Ciego de Avila, on returning to my hotel at night from the literary activities, I was informed that my reservation had been cancelled by the organizers of the Fair. That night I slept at the house of the taxi driver who drove me, and in the morning I went back to Havana.”

How have they damaged his work? How is it possible to survive in a hostile country and still maintain a creative rhythm, maintain your healthy and coherent work?

“In some ways there has been a positive aspect,” Angel admits, “because they’ve helped me to change my style a little, I have written a book of stories of the absurd. But on the other hand, sometimes many days pass when I don’t create. They have succeeded, I wouldn’t be human if it didn’t affect me, and I accept that without shame. I’m not just constantly anxious about the defamation, nor even the beating where they broke my arm. This doesn’t even compare to the terrible reality that for two years they haven’t let me see my son. This is my true martyrdom. Although in the end, inevitably, I end up taking refuge in literature.”

Most of his friends have distanced themselves. Forgotten his telephone number, forgotten his apartment and his street. “They don’t want to commit suicide, culturally speaking,” says Angel, and without his knowing it something like guilt and remorse came over me because I know that I, like the writers Amir Valle, Alberto Garrido, Jorge Luis Arzola, like so many others we love and admire, we have also left him a bit alone, scattered to the United States, the Dominican Republic, Germany, and search of a happiness and peace that we know we can’t find.

I like to think of Ángel Santiesteban like our Alexander Solzhenitsyn. Too many similarities exist between this tropical Havanan and that Russian dissident who with a couple of books, (A Day in the Life of Ivan Denisovich and The Gulag Archipelago) not only won the Nobel Prize and immortality, but also gained the eternal respect of those who worship freedom.

The day when this grey storm comes to an end, and the meetings and reunions take place; the day when we can start from scratch to build a better country for our children, the blessed like Ángel Santiesteban who has written so much and mourned so much, will be our intellectual guides and our written memory so that we will never again make that mistake.