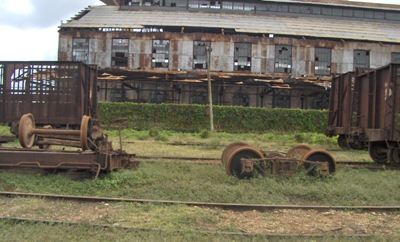 The article by Juan Varela Pérez, faulting the control and dedication in the sugar harvest, published in the daily Granma on May 5, 2010, is evidence that the critical condition of Cuban sugar production reflects the situation of agricultural production and the of the economy in general.

Among other things Varela said that “the current year’s harvest, 2010, can be described as poor in production and efficiency,” it has been “the poorest since 1905,” and the Ministry of Sugar  and the Business Groups had no control and had to enforce organizational alternatives that would allow them to solve the difficulties which as of March 25 resulted in “a deficit of over 850,000 tons of sugar cane,” that cane yields in 2005-2008 “grew 24 tons per hectare to 41.6, again depressed and showing a costly decrease,” and that to reverse the current crisis demands a comprehensive review and recommendations to analyze how to improve the cane yield “whose production is now the lowest paid work in agriculture.”

To understand the magnitude of the disaster, we review some data of Cuban sugar production in the last 115 years. In 1895 for the first time the country produced 1.4 million tons of sugar, an amount that fell with the incendiary torch during the War of Independence. In 1903 production was 1 million tonnes and in 1907 reached 1.3 million, in 1919 4.0 million was exceeded, and in 1925 the figure reached 5.3 million, in 1948, 6.1 million and in 1952 the country achieved the colossal figure of 7.2 million tonnes. In 1959 there were more than 6 million tonnes and in 1970 it reached 8.5 million, a record number in our history, with the drawback that the determined effort to accomplish this disrupted the entire Cuban economy.  Then the harvests between 1982 and 1990 were close to that of 1970, until 1999 hardly reached 3.8 million tonnes.

To address the decline of sugar, Ulises Rosales del Toro, Major General and Chief of General Staff of the Revolutionary Armed Forces (FAR), was appointed Minister of Sugar. In that position, he forecast a recovery and in 2001 reached the figure of 5 million tonnes. To that end he directed two projects: the Sugar Industry Restructuring and the Alvaro Reynoso Task. The first was aimed, among other things, at achieving an industrial output of 11%, which meant removing 100 tons of cane, 11 tons of sugar, but in 2002, 71 of the 156 sugar mills closed and 60% of the land was redistributed from cane to other crops, even though Cuba has enviable conditions for its production. The second, which is named after the famous Cuban Alvaro Reynoso, intended to achieve a yield of 54 tons of cane per hectare (well below the world average), which was also unsuccessful.

The strategy proved to be unfeasible. In 2001 there were 3.5 million tonnes produced instead of 5.0 million, an amount similar to 1918, and in 2002 it dropped to 2.2 million tonnes, the lowest in 80 years. In 2003 it dropped to 2.1 million and in 2004 there was a slight recovery which reached 2.52 million, then it fell precipitously in 2005, which produced only 1.3 million, the worst sugar harvest in the last hundred years — a figure that was produced in Cuba in 1907 — while the yield per hectare, as explained by Juan Varela, suffered a slight increase before continuing to decline.

The other measures taken for the agricultural economy have been, essentially, the enactment of Law 259, on the distribution of land in usufruct, and changes of staff in charge of the ministries.

The first measure, Act 259, is limited to handing over idle land in usufruct for 10 years; these are lands which were invaded by the marabou weed, to the point that the area of cultivated land between 1998 and 2007 decreased by 33%.  Despite this, the Law retains ownership in state hands. On Thursday, May 13, on the television show The Morning Journal, the journalist Ariel Terrero said that although Act 259 increased the number of farmers, they lack the equipment, resources and experience, and that Cuba is importing 80% of consumed agricultural products; that the yield of bananas grew over the previous year, a year which was also very bad for cyclones, but yield decreased in many other areas such as taro, fresh vegetables, etc., and that half of the land given by Act 259 is still not producing.

The second measure, changes of staff, has not had any positive effect; Ulises Rosales del Toro, after eight years without being able to stop the decline in sugar production, “based on his extensive experience of leadership and political authority and the need to enhance agricultural production, of the country,” was appointed Minister of Agriculture and in his place, as Minister of Sugar, Luis Manuel Ávila González, was appointed but later dismissed. More recently, the First Deputy Minister of Agriculture, Gustavo Rodriguez Rollero, was promoted to Minister and Ulises Rosales and elevated to the post of the comprehensive care of the Sugar Ministry, Agriculture and Food Industry.

The essence of failure both in sugar production and the rest of the economy, is the subordination of the economy to politics, the inefficient current structure of ownership and wages that do not correspondence to the cost of living. A millennium of experience and economics have shown all over the world that human beings act depending on their interests, so when the interest is gone, as has happened in Cuba for the reasons discussed, the result can be no other: preventing citizens, by law, from ownership, and paying them an insufficient income, means what instead of engaging in production they will remain outside the law, with the consequent detrimental ethical deterioration.