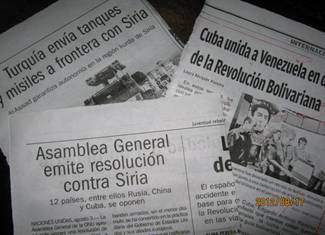 If you have been following the media campaign by Cuban authorities (and those of the ALBA** countries, among others) on behalf of Syria and Venezuela, it is easy to detect a number of inconsistencies in approach.

In terms of Syria, the repressive actions by the government against its citizens, who have rejected it and are in open conflict with it, are approved and sanctioned as “necessary actions against traitors and mercenaries.” (The language is familiar to us.) In contrast, the positions taken by a majority of Arab and western countries, which accuse it of genocide and demand it take effective action to reverse the situation in favor of its citizens, are considered “unacceptable interference in an independent and sovereign state.” In other words, according to these criteria, one must permit Assad to massacre his people with impunity while remaining silent, arms folded, and wait for him to complete his task.

In terms of Venezuela—where everything is a bed of roses—any form of support or aid that helps the “comrade president” retain power constitutes a mandate from bothBolívar and Martí. Rather than a form of interference, it is instead a show of “simple revolutionary and anti-imperialist solidarity in the process of Latin American emancipation.”

From this comfortable position, one can—without the least embarrassment—campaign on behalf of the incumbent, and against the opposition candidate, as though this did not constitute crude interference in Venezuela’s internal affairs, which are the sole responsibility of its citizens to debate and resolve. If the situation were reversed, they would have already denounced such actions and sought the intervention of ALBA, UNASUR, MERCOSUR, the OAS, the UN, and even the International Court of Justice at the Hague—as is their normal reaction—in an effort to maintain “the fraternity of the left” and that of all its signatories.

These positions, easy to check daily, demonstrate a lack of seriousness and respect for the accords and treaties signed by governments in the region when the need to defend political and ideological interests are involved. Some come to the defense of others, as though the herd has been attacked.

A recent example of this attitude is the so-called “Assange case,” in which a straightforward accusation of alleged sexual assault has become a political issue—with implications for a number of countries—after Ecuador granted the accused diplomatic asylum in its London embassy over objections from Great Britain. Though the British response was excessive, Ecuador’s went even further. It issued calls for a “holy Latin American war” against that country, reviving yet again the tired slogans of “wounded dignity,” “humiliated sovereignty,” and “independence under assault.”

It seems the president of Ecuador, who overnight has become a champion of freedom of expression (something he represses in his own country), is trying to replace the Bolivarian leader—with help from his Latin American cohorts—as the point man in the “war against the imperialists.” With all due respect to him and the others, the task is too great. These efforts to make a hero out of a common criminal confers neither respect nor dignity on any country, much less on all of Latin America.

These strange assumptions continually throw fuel onto the fire and distort reality, making it very difficult to achieve peace and advance civilized coexistence between nations. The seeds of this new cold war, one of several in contention, are still incubating thanks to widespread indifference. I hope it can be stopped in time so that we have nothing to regret later on.

*Translator’s note: The title is a pun on the Spanish word extraño, which can mean both strange and foreign.

** ALBA stands for Alianza Bolivariana para los Pueblos de Nuestra América (Bolivarian Alliance for the Peoples of Our America). An organization of socialist and social democratic Latin American countries made up of Antigua and Barbuda, Bolivia, Cuba, Dominican Republic, Ecuador, Nicaragua, Saint Vincent and the Grenadines, and Venezuela.