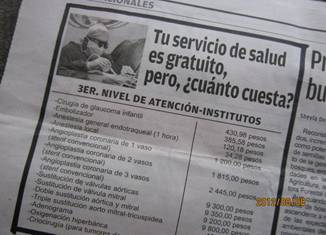 Faced with the inability to publish news of real and palpable economic successes, which have been notable for their absence over the years, the official press waves the two threadbare banners of Cuban socialism—education and health.

The first has been in prolonged crisis. With its “emerging” teachers trained through accelerated and intensive courses, its decaying facilities and its politicized study programs, Cuban education amounts to a real headache for both students and their parents, who must augment this training by hiring private tutors if they want their children to gain the knowledge necessary to pass their exams.

The second, which is the primary subject of this post, is also in crisis. For several days on page 2 of the newspaper Granma there has been a chart with the evocative title, “Your Health Service is Free, But How Much Does It Cost?” It details the costs of certain services and their corresponding level of care.

Even if we assume that these costs have been correctly calculated, the claim that these services are free is false. For fifty years they have been paid for with the money that Cubans have not received, and still do not receive, due to poverty-level wages. (The average monthly salary is no more than twenty dollars.)

Although every citizen is paid a salary that corresponds to the work he or she performs, not everyone is sick, gets sick regularly, or makes use of these services. In reality these services are used by only one percent of the population. As if that were not enough, the majority of the facilities where they are offered are badly deteriorated, lack water, are unhygienic – including those that were recently but badly repaired – and have limited resources and medications.

If there is anything to be thankful for, it is the treatment provided by the doctors, nurses and other auxiliary personnel. While they too are paid poverty-level wages, they make efforts to provide quality care to their patients, even when they know that the medications that they prescribe are in short supply, or are impossible to acquire through badly stocked pharmacies.

If we are talking about costs, why discuss only certain services? The official press does not decide to publish anything on a whim; there is always some motive behind everything that is published. This often repeated method has become well known.

Perhaps it might be convenient to publish a chart that reflected other costs. It could be called, “How Much Has and Does the Government Cost the Cuban People?”