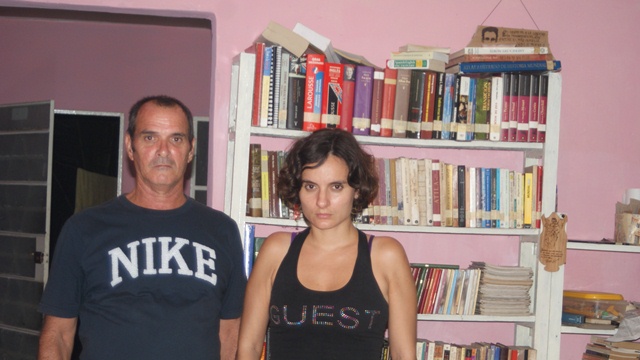 Lourdes Esquivel, Lady in White, was also detained in the jails of the Santiago Station of Vegas last October 14.  When she left her house, 20 men — at least those whom she could count — threw themselves on her and told her:  “There is no mass; jail.”  She was conducted to the aforementioned Police Station and locked up with a woman with HIV, to whom one of the jailors said: “Do you want me to give you a knife?”

Thursday night we visited the home of Lourdes and her husband Jose Diaz Silva, who is president of the Opposition Movement for a New Republic, and is also a former political prisoner.

Earlier, last October 2nd, Jose Diaz Silva was detained near his house (located at 5th street Number 18406/184 and final. Apartment Complex Porvenir, Boyeros, La Habana)  At the time of his detention, he was in the company of Lourdes Esquivel, his wife, and they took him in a patrol car number 870 to the Station of Santiago de Las Vegas.  The cause, on this occasion, was his having occupied some several printed pages with the Citizen Demand For Another Cuba, which he has promoted since the Civil Society inside the Island, and which have been signed by a good number of Cubans, in order to urge the government (which we cannot elect via free elections) to ratify the Covenant of Political and Civil Rights, and the United Nations’ Covenant of Economic, Social and Cultural Rights, signed by the Cuban Government February 28, 2008, in New York City without having ever been implemented, apparently because of not being forced to do so until ratified by a second signature which is what the Citizen Demand is asking for.

Silva was transported to the Santiago Station of Las Vegas, in the first place; but then he was transferred to another Station about which they gave no information to Lourdes until the moment in which he was freed.  Meanwhile, she did not stop seeking that information about his whereabouts, going to all the Police Stations in Havana, accompanied by one of her children.

In the interim, on October 3, the police returned to the house.  Lourdes’ younger son and his wife were alone, because Lourdes was searching, without finding an answer from the authorities, where her husband had been taken when they removed him from the Santiago Station of Las Vegas.

The list of articles stolen by the police and State security is as follows:

2.  An Amazon Kindle, electronic book, which forms part of the collection of the Independent Library that functions in the home.

4.  Cards of the said cameras.

8.  Hundreds of photos, among them family photos.

10.  Playing cards, printed on the back with a promotion of Cambio and another with promotion for the release and memory of the 75 of the Black Spring of 2003, Cuba’s darkest spring.

11.  T-shirts used to promote Cambio, another one of Bacardi.

12.  Promotion caps for the Library and some 50 Cambio bracelets.

13.  Three thousand seven hundred cards with information about the members of the Opposition Movement for a New Republic.

21.  Passport and documents that were issued to the family members since 2007.

The closing of the story, as much as its middle and its beginning, serves to denounce the justice system between the citizens and the State in this dictatorship model, and to put in evidence the human and intellectual quality of those State Security agents that have been “improved,” by the ideological political chapter of the Cuban education system, and very especially in the formation of the political police which is the upper echelon of that moral ladder.

Agent “Joan” (persistent bully also of Sara Marta Fonseca, because she is in charge of repression of the Boyeros municipality) threatened Silva that:  “They’re not going to let the Opposition Movement for a New Republic rise.”  Every time Silva has a compendium of his members “they going to throw it out.”  And “Now that Silva has a full record, ’they’ could close it, sending him to prison and giving him 20 years.”

October 5 at 5 in the afternoon Silva was freed and before learning of the sacking of his house in his absence, agent “Joan” imposed a fine of 200 pesos for the crime of “Hoarding Books.”

I am not pulling your leg; in Socialism that is possible and the crime of the Tribunal’s “Moral Conviction” for which Silva was sentence fo 6 years in jail in 1994.  (And although this is material for another post, also on that occasion they evicted his wife from the house where she had lived for 7 years with her three children and made her live in a wooden room attached to the house that they had expropriated and in which today another family lives.  In spite the facts that all the lawyers and housing inspectors recognize that the property is still that of the Silva Esquivel family, the socialist legality permits these injustices that do not exist in an independent Tribunal that protects the citizen from the “omnipotent” State).

The members of the Opposition Movement for a New Republic have been visited and threatened equally by the “State Security.”

Which of the articles of the Universal Declaration of Human Rights have not been violated in Cuba in these 53 years?