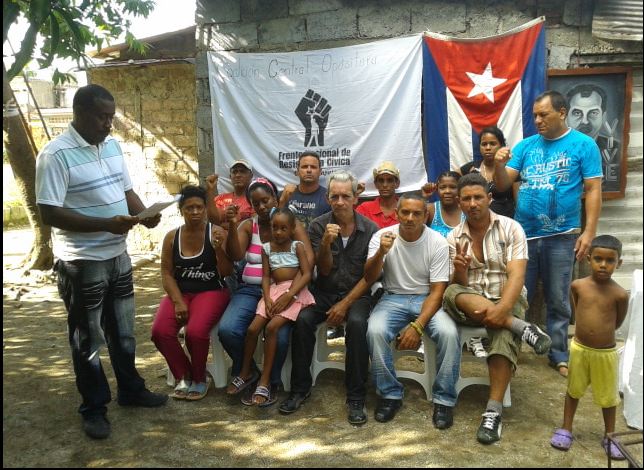 Points of the declaration from Virginia.

The signatories below, members of a countless number of organizations which make up the Central Opposition Coalition, an entity affiliated with the Orlando Zapata Tamayo National Front of Civic Resistance, have gathered this Wednesday, 3rd of October 2012, in the already historic and war-hardened neighborhood of Virginia, in Santa Clara, where we will write down in a public declaration of principles the following aspects and commitments.

1- Today those who sign and seal this declaration support the initiative named “Civic Demand for Another Cuba”.

– At the same time, all and each of those present ratify the viable character of the program “Towards a National Stoppage” as a continuity and colophon to the campaign of No Cooperation in its first and second stages. As promoters of the same, we make clear that with the campaign “Towards a National Stoppage” we initially make a call to take consciousness on the side of the Cuban population of the necessity to create conditions that permit, with the participation of all Cubans, a gradual stoppage of economic, political and social structures and mainly the repressive ones of the Castro Communism.

3- Those making this declaration today in the Neighborhood of Virginia see with consent and patriotic prid ethe birth and positive development of Homes of the Prisoner in Cuba, genuine expression of the maturity of the unanimity of a nation that they try to divide based on absurd categorizations.

4- At times when the forces of domestic resistance suffer like never before from the repressive onslaught of the tyranny, we request solidarity from the international community. From our hard reality we pray so that the people of Venezuela rescue again the destiny of this brother nation and with it the futureand stability of our hemisphere.

5- The Central Opposition Coalitionand the National Front of Civic Resistance Orlando Zapata Tamayo, ratifies its executive structure in Cuba, as well as to ratify the Assembly of Cuban Resistance as our representative outside Cuba.

Among the present organizations are found Resistance Movement, Rosa Parks Women Movement, Nationalist Party of Cuba, The Home of the Prisoner, among others, all the organizations ratify their unconditional permanence, eternal and faithful to the Coalition of Central Opposition and we recognize our leader Idania Yánez Contreras as figure who most gathers us together with most important, serious, genuine leadership of the opposition in the center of the country.