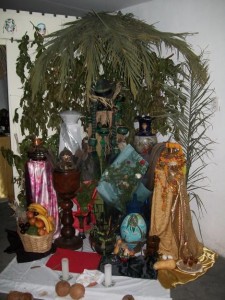 Judging by what Dania Castillo, wife of Jesus Izquierdo Izquierdo, says, neighbors in Ampliacion de Lyuano, San Miguel del Padrón municipality, Havana province, the arrest and imprisonment of her husband came about through “religious suspicions, family intrigues that accused him of supposedly shooting one of its belligerent members and police stubbornness, committed to investigating a case that came down to the withdrawal of the complaint, the denials of the inmate, and the subsequent death of the victim, who passed to a better life on receiving four stab wounds from a colleague in witchcraft who doesn’t believe in bullies or blackmail.”

According to Dania, “Jesus is very noble to live among the neighborhood toughs. His successes in the Abakuá sect, where he taught African languages and oriented the initiates to awaken mistrust between associates who discredited the fraternal sense of religion. They tried to throw him the shit out of a ceremony and he avoided them. No one knows who fired the shots they attribute to him, but being black and an armed guard for a Regla business, the police do not believe in his innocence. “

The woman adds that four months ago her husband surprised the guards in a search and seizure in his workplace. “The were mafia-types, like those capos of American films. Since then he hasn’t seen daylight. He is accused of possession of a firearm and shooting a defenseless person, as if the executed deceased were an angel.”

Dania complains of the abuse of her husband by the police investigator/interrogator at the Acosta Station in the Diez de Octubre municipality, where he spent two months in precarious conditions. She says that although the paraffin test they gave him was negative, “They threatened him there during the interrogation and subjected him to psychological torture. He was taken from a cold to a hot cell and forced to get up and down every ten minutes. Just days before the move to the Valle Grande prison in La Lisa, he accepted drugs to treat his blood pressure. “

Gladys Fernandez, mother of Dania and mother-in-law of Jesus, believes that in Valle Grande, “They suffocate him less, but the investigator/interrogator does not support the withdrawal of the accusation by one of the witnesses and the accuser’s mother. She said that as expected the judgment and process will be closed, the problem will depend on the judges and the attorney. “

After four months of imprisonment and police harassment, Jesus Izquierdo Izquierdo continues to deny the charge of carrying and firing guns. One of the accusers is dead, the one who sparked the dispute is already a cadaver, and a witness insists on withdrawing the complaint, and what’s more police are pressuring him to take one year in prison for concealing. Apparently, the uniforms only care about the possible existence of a firearm in a slum dominated by criminals and religious, facing off against each other.