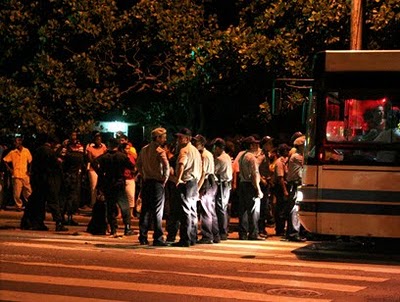 Unmuzzled dogs, lines of patrol cars, cops in every possible color-of-the-rainbow uniform, drunken masses, mobs lined up to put on the one bus or to get brained with a bottle.

Walkie-talkies, handcuffs, zambranes, tonfas, mace, Cuban free-for-all of the midnight death of the nation. Once in a while a bullet in the air, a helpless bleat to the moon, limit of the forgotten locals of twenty-first century socialism.

Fuck the poor of the earth, fuck the slaves without bread…

These are the Satanic Saturday nights in Sad-El-Vedado, Havana-With-Nothing, Son-of-a-Bitch-America. With this mass of meat we must constantly plow. And drag. Scratching the reefs of the island platform. Insulated. Insipid. Insulting.

Get ready to give it up, guys: Get thee behind me Satanvolution…!

Official history like a feces filled toilet. No excuses no pretexts. Context content with its own barbarism. No reporter accredited to this city speaks of the spontaneous riots, the ambulance sirens blaring with the triumphalist fanfare of street level politics that leads to the cell or the slab.

Get outta my way, move it or lose it…!

The capital of none of the Cubans is a village freezing in the colorless heat of the early morning hours. At night all police are gray. Rudeness is gratis. Wholesale gesticulation. Elevator music. Sixteenth-note salsa of carrion and sixty-fourth notes with nowhere to crash-boom-bang and escape. Rioting before reggaeton. Pedestrian pop. Congenital concerts. Loudspeakers grate like recycled speeches on a record outside of revolutions. Avenue 23 as a launching pad to catapult you to the pediment of the same and always the same place. Claustrophilia of L Street Holocastro, rhetorical madness. Anarchic pressure cooker.