Commander Delio Gómez Ochoa has disappeared from the annals of the Cuban military and bureaucracy. Only his family and colleagues remember his actions in war and the energy he put into businesses and regions in the country. Some say he fell into disgrace after his failed intervention in the Dominican Republic where he went in mid-1960 on the orders of Fidel Castro, as head of a special command intended to overthrow the tyrant Rafael L. Trujillo, who was executed a year later by a group of intimates.

Ochoa Gómez and his company landed in the region chosen, but could not seize the airport, deliver weapons and initiate an insurrection. They were not waiting for him with flowers, but rather with shrapnel. He barely managed to escape into the nearby mountains, others were hunted down and tortured by the bloodthirsty Ranfis, eldest son of Trujillo, who pardoned the life of the commander aggressor and returned him to Cuba with his pilot and plane.

I am updating the story as a friend to whom I lent La Fiesta del Chivo, a fictionalized biography by Mario Vargas Llosa about the Dominican despot, on returning the book to me reread the passage where the Peruvian writer tells of the military misadventure of Delio Gómez Ochoa and the “act of goodwill of Trujillo,” who anticipating the continental leadership of Fidel Castro, enlisted in 1947 in the abortive expedition of Cayo Confite.

It turns out that my friend worked with Gómez Ochoa, when the officer directed the National Marble Company, located in the late eighties in El Vedado (20th Street and 3rd). According to him, Vargas Llosa would have been interested the following anecdote of the soldier turned entrepreneur.

“I practiced as a specialist in lubricants at the office of Vincent, head of transport and a close friend of the director, who used more as a personal intermediary responsible for the vehicles. Delio was then in his sixties, of medium height, going gray, he knew nothing of marble or building materials and used to snore in meetings. He distinguished himself with beautiful young women, especially his secretary, a Caribbean nymph who led to his divorce.

“I can’t forget that morning when Delio’s wife came to the company in her Chaika — a Soviet-made luxury car — and threw into the reception area several boxes of the director’s clothes and belongings, who calmly called Vincent and ordered him to accompany us to his lover at a residence in Siboney. As the secretary did not like the mansion, a little while later poor Delio asked us to leave everything as it was and we helped her to settle into an apartment in the Almendares neighborhood, with a terrace overlooking the river.”

According to the friend, Commander Delio Gómez Ochoa was later promoted, while Vincent was killed in a tenement fire in Zanja Street in Central Habana, where he lived with his wife and children, waiting for the apartment that his boss had promised him. Fate is ironic, No? 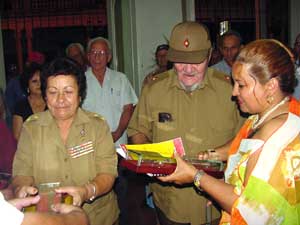