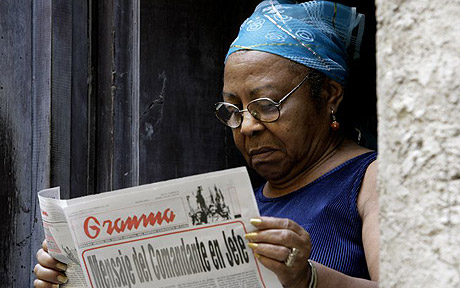 Readers debate, in the Letters to the Editor section of the daily Granma, the measures taken by the Provincial Health Directorate of Havana, against the self-employed in hospitals.

“If there are private sellers around, and even within, the hospitals is because those visiting and the hospital workers themselves need to buy food and there are no legal places close enough where to buy it,” said P. Menendez in a letter published in the newspaper, this June 17.

Menendez expressed his disagreement with “the measures taken to eliminate sales by the self-employed at health institutions,” from Dr. Alfredo Lorenzo Gonzales, leader of the sector in Havana, which was published in the same section, 20 days ago.

Gonzales Lorenzo replied to the letter of one commentator, published in late March, saying he “totally disagreed with the self-employed in different trades coming to make their sales at different hospitals.”

Since 1994, the Ministry of Public Health (MINSAP), in order to limit access by vendors to hospitals, mainly the maternal and pediatric, banned “the sale of any kind, especially food, by private sellers in the aforementioned centers and surrounding areas.”

“It’s a situation we can not permit because of all the negative consequences it brings, so we have been applied at different times, measures to address it, but we have not achieved the necessary result,” admitted the Provincial Director of Health.

“With the crackdown on vendors, the need for the products they sell is not eliminated and therefore we don’t get results,” said P. Menéndez. According to the reader, the self-employed “are meeting public health needs that can not be otherwise met.”

“… it seems to me the most revolutionary approach would be to look for clean locations, with inspectors and controls, where legal ways to sell can be established in the vicinities of the hospitals or within the hospitals themselves if there are available locations,” he said.

“The hospitals can not become a plaza of the self-employed, nor dedicated to the sale of food or other activities,” said M.M. Batista Hernandez, another reader who participated in the debate. “Hospitals are not hardware stores, but you have to think of initiatives,” he said in his letter that was published in the June 24th section.

“It’s true what P. Menendez says, sometimes you have to spend whole days beside a loved one and you need to eat to keep your strength up in painful situations such as having a sick family member,” added Batista Hernandez.

“However, that service is not assigned the health authorities, nor is commerce or food service or the local government, responsible for managing the presence of local food units or leading properly cleaned sites for this activity by those who don’t work for the state,” he added.

In response, the Provincial Director of Health reported that the Provincial Administrative Council for the capital agreed to include “in the regulations of areas for self-employment, non-authorization of sales in the vicinity of hospitals.” In concluding his response, he requested “the cooperation of all our people in the revolutionary struggle, to not allow vendors to proliferate,” in hospitals.

Menendez suggested he re-read the guidelines adopted at the Sixth Congress of the Communist Party and not ask “one more time to waste our time with old speeches.” “Did he not see a contradiction in asking for more of the same, although he admits it has not yielded any results, and being revolutionary,” asked P. Menéndez

“… It is just that the necessary balance is missing between the position taken by the provincial director of health with regards the sale of food in and around hospitals and reply of P. Menéndez,” affirmed Batista Hernández. “The debate and dissent must be based on respect,” he added.

“… A P. Menendez overdid it, because he almost called Dr. Alfredo Gonzales counterrevolutionary for expressing his considerations of demanding order and discipline as other readers demanded,” he said. “To say this to a revolutionary and is one of the greatest insults that can be launched,” his letter concluded.