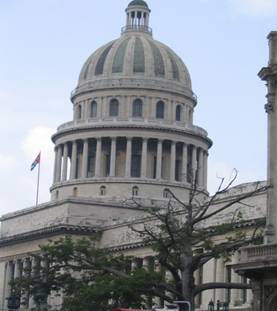 In the 1950s one of the principal objectives of the fight against the dictatorship was the full restoration of the constitution of 1940, some of whose articles had never been fulfilled. Once the new regime was in power, however, it ignored this constitution and the country began to ruled according to the so-called Fundamental Law, which legalized a priori any action carried out by authorities based on the principle that “the revolution was the source of power.”

It was not until 1976 that a new constitution was drafted, one with a new socialist character, modeled largely on the USSR’s Stalinist-era constitution, which by then had already itself been revised. It was drafted by a commission created expressly for this purpose rather than by a constituent assembly, which would have included representatives from the country’s entire political spectrum. Upon completion it was submitted to a national referendum (whose participation was more formal than real) and was approved by referendum with few significant changes, the way things always get approved in Cuba.

This constitution — amended and ratified in 1992 and 2002 — is the one now in force, although it remains unfamiliar to the majority of the population and even to the authorities, who take it out only to highlight a few of its articles when they find it politically convenient, ignoring some and violating others. For most citizens the constitution is really just one more document without any practical application for solving their day-to-day problems and, therefore, useless.

In addition to other absurdities, archaic articles and inconsistencies, this constitution decrees one-party rule, the exclusivity of state organizations as the only legal avenues for expression, and the irrevocability of socialism. It also enshrines the idea that none of the freedoms for citizens recognized in its text can be exercised to oppose anything stipulated in the document or in its laws, or in opposition to the existence or aims of the socialist state, or against the decision of the Cuban people to build socialism and communism. Once again everything is ideologically generalized, ignoring the fact that the so-called “Cuban people” are not made up only of sympathizers of the regime, but also of many thousands who are not, and who have and hold, as Cubans with equal rights, other political, economic and social viewpoints.

If we hope to have dialogue and peaceful means of resolving our problems, it is necessary to have constitutional and political reform which permits the decriminalization of the opposition and expansion of civil liberties. This must not be seen as something contrary to economic reform or as an objective to be achieved after such reform. It is rather something that cannot be postponed, a necessity brought about by the appearance of new constituencies that are not being legitimately represented by current state institutions.