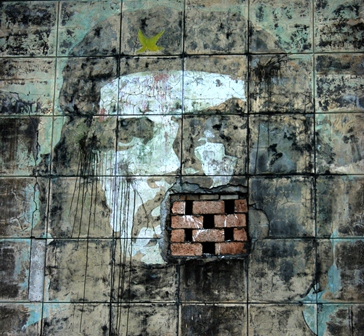 Unhappiness can also lead to the renunciation of freedom.

I confess that I felt like giving up. To become something like the manager of my building. Happy. Pleased with the security offered by this state of affairs. I saw myself looking for work. I supposed it would be what a friend offered to arrange for me. With “access to hard currency” — according to her own words, so sanitized that they refuse to say: money. I saw myself in a uniform, getting up early for nothing… to make a little money for the month and buy a substitute for happiness.

Quiet, not looking for trouble, in one of those privileged jobs like my friend promised to try to get me without hearing either a yes or no from me, then I would begin to get old. Still navigating this nightmare without the power to respond. At those times I thought everything had moved, the whole planet, and I wandered through the vacuum unable to get a foothold anywhere.

To augment the dose of surrealism while walking I passed a place where there was an immense banner reading “The FAR (Revolutionary Armed Forces) image of the people.” And I died laughing. Now I felt myself beseiged from all sides: on one side the horrible feeling of loss I was suffering and on the other the promise of happiness in Socialism. Where all that matters is not looking for trouble, buying everything you can buy. (It’s only because of this they want to lift the economic embargo, to consume while doubling down on the discourse.)

This would be the other extreme of the post I titled Vigil of the Scales, where I thought I was happy and this also could lead me to renunciation. I came to think that if I had to go back to get inside the voice, it would mean ceasing to exist again. Because only emerging from the socialist cosmovision of the world — I’ve always said — can you knock on the real door of destiny. What is the Beast of the Apocalypse with the image of totalitarianism: “And no one could buy or sell if he didn’t have the mark of the beast.”

Why not abandon my blog, “The Blog of Jerome,” and look for a job keeping my mouth shut. Then I remember John Malkovich in Dangerous Liaisons and I assume that to answer from the testimony from my blog, “It’s beyond my control.” Can the horrible situation I subjectively feel myself to be in make me cry: “To hell with the Blog of Jerome!” mimicking that of Rimbaud, “To hell with poetry!”?

Bathed in your languors, o waves, I can no longer
wash away the wake of ships bearing cotton,
nor penetrate the arrogance of pennants and flags,
nor swim past the dreadful eyes of slave ships.*

Of course I also want to have a job, but I don’t need to return to servitude. Nor do I like being at home without hours, doing whatever I want with the time, writing at times, reading, waiting for I don’t know what. At best they might even accept me in a government job, or a snack bar belonging to the “National Union of Self-Employed Workers,” but if that were possible it would inevitably lead to the double life, which is what almost everyone does in Cuba.

I want to be employed in opposing the falsifiers of happiness, the sadists who threaten to put us in prison if given a favorable world situation — sheltered by the indolence of the rest of the world that doesn’t anything about Cubans — they have no clear limits on political or religious power before the image and likeness of God…

To not to have to think any more that security consists of the only kind of happiness possible in Cuba today, that which happens through the uniform and the calm fingerprinting whose ink later stains the mouth; and that, of course, ends up with me dying of laughter.