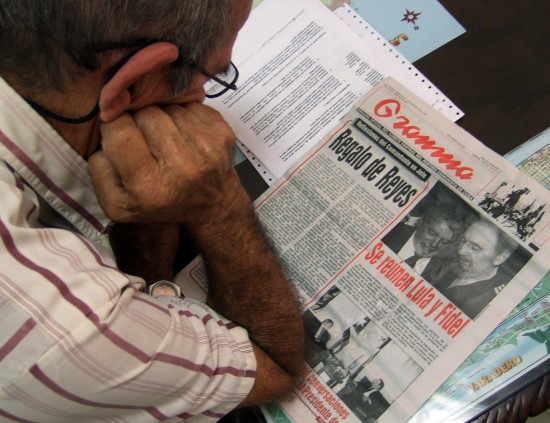 Readers of Granma, the official daily publication of the Communist Party of Cuba, are requesting real action against the sellers of various household items, one of the self-employment categories most in demand by Cubans.

J.C. Mora Reyes, this last Friday, complained about the lack of governmental action to repress it, in the Letters to the Editor section on June 8. According to the commentator, along with the denunciation, the retailers have crossed a line: “What was sneaky before and supposedly ignored, now is known.” However, he asserted that “everything stays the same, thereby encouraging transgressive tendencies as something quasi-normal.”

“I’ve read, heard, and given many opinions about the resale of articles commercialized by the State with inflated prices formed only by the law of supply and demand and the pretense of innocence by those who should and are obligated to protect the consumer,” commented J.P. Granados Tapanes, in the same section.

The weekly section in Granma, in less than one month, published around 10 opinions of readers who were against the retailers. The majority of readers think these people are not self-employed and accuse them of strangling the economy for those who are working.

According to official data, before expanding and creating flexibility in the types of self-employment in October 2010, the sector constituted approximately 87,889 people, 0.78 percent of the population. Presently there are 378,000, and it is hoped that the number will grow to 500,000 this year.

“It’s sad to see how all types of merchandise, in many cases subsidized by the State, and other things that come from outside in hard currency, are for sale publicly at inflated prices with self-employment licenses,” comments J.P. Granados Tapanes.

Legislation prohibits self-employed Cubans from selling industrial articles acquired through established state networks. It also requires them to market their own products exclusively, with the possibility of freely setting prices.

Grandos Tapanes called the self-employed cuentapropistas “workers by means of extortion” and held them responsible for “the deterioration in the ability of any employed Cuban, no matter what his economic level, to buy things with his salary, which is worth less all the time.”

The solution for these retailers is a wholesale market, where they can acquire merchandise in quantity and at lower prices than those offered to the population in retail markets, only the ones legally recognized by the authorities. This is a problem that, according to the recorded guidelines approved by the Sixth Congress of the Communist Party, will be worked out before the end of 2015.

According to Mora Reyes, public denunciation doesn’t have any effect when “there exists tolerance, procrastination, inability, expediency, or defections on the part of the authorities in the application of energetic measures” against these demonstrations.

According to the reader, to go on the offensive is not something to be taken lightly. It’s “a pressing responsibility from the moment in which you become conscious of a situation incompatible with human dignity. Acting is better than talking,” is the conclusion.

There’s no doubt that the government’s inactivity in the face of these denunciations converts this section of the only daily newspaper into a national tirade. It airs complaints and laments without giving any solution, in the style of the accountability of the municipal delegates. However, the cuentapropistas are worried about the influence that these opinions could have on the upper echelon of leadership.