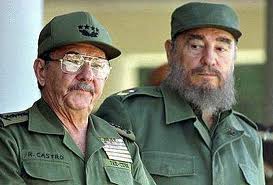 The cases of corruption involving Cuban officials who served in Fidel Castro’s regime are increasing. Or Raúl Castro is simply switching Fidel’s men for his own.

Raúl Castro replaced Fidel Castro on February 24, 2008 due to an illness that had almost led to the latter’s death. Subsequently, we began hearing media reports about the replacement of ministers and vice-presidents, and the astonishing disgrace of Felipe Pérez Roque* and Carlos Lage Dávila*, the physician who brought financial ruin to the island – one of many such people.

There was virtually nothing the men around Fidel did not steal. After fifty years these cases of corruption finally came to light. And yet with all the security at the government’s disposal, it nearly failed to discover a single one. The fact is Raul now wants to govern with men in whom he has confidence and knows what they are capable of “doing.”

As it happens, Fidel’s cohorts did as they liked in Cuba as long as he remained president. The president who wanted everyone to be equal had determined that a lazy revolutionary pioneer should earn as much as a college graduate.

Little by little the country is being militarized while members of civil society are increasingly being branded as “mercenaries” by the Cuban government.

Translated by: Maria Montoto and Anonymous