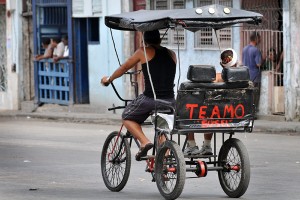 The administration of General Raul Castro has known how to improvise with the car in motion. Castro II, who this past June 3rd turned 80 years old, has had a trajectory as a warrior, soldier, and politician, always crouching under the shadow of his media star brother who governed the island for 47 years with a self-centered power and long anti-imperialist speeches

General Castro knows his limitations. He doesn’t have the gift of gab to capture his world political counterparts or fill plazas with fiery harangues. He is used to working as a team. And he listens without interrupting the statements of others.

He also never had the complex of a world statesmen. He never was the top of the class. But he has taken on guiding the fate of a nation impoverished by 52 years of crazy economics, ferocious bureaucracy, military campaigns, and subversion in the Third World. He knows that his mission is trying to save the historic legacy of the revolution and attempting to create ideological continuity after his death and that of his brother.

Before starting to renovate the building on a weak foundation, he did an evaluation of the dangers. The diagnosis was correct. There were more than enough bureaucrats; the communist party is an intruder in the subject of business administration; there was a need to stimulate self-employment and also send more than a million workers to the unemployment lines.

He emphasized belt-tightening to not go over the budget, something sacred. No more taking money from public funds just to fulfill whimsical ideas like the construction of a biotechnology center outside of the annual planning. That was his brother’s way, who jumped over the rules as easily as drinking a glass of water.

Still Castro II believes in Marxist theories. But he is realistic. And when he opens on his desk the world map, he observes that no communist nation moved forward using quinquennial plans and a centralized economy. But he is cautious.

Still he has the jealous and vigilant eye of his brother taking note. He is trying to buy time. The erosion of power when he lets people act on their own disgusts Fidel Castro. He always preferred to keep the herd tied up. Let the state give the good and bad news. The awards or the punishments.

But the General and his military partners think differently. It doesn’t matter how you call the ideology, what it is essential is to have the power. And that people drink milk, eat well, and get enough money to consume and have fun.

Raúl Modesto Castro Ruz has always been a plotter. His reforms will be at a Danzón pace. Slow, sure, and anticipating disasters. But decidedly, at the end of the tunnel, the model Cuba tries to follow is a mixture of Vietnam and China, beautified with components from Latin-American folklore, like the nonsense of the new socialism of Chavez or the pragmatism of a modern left like the Brazilian one.

He plays three ways. From China he needs money and experience on handling a market economy and an inflexible control over the dissidents. Vietnam is a good example on how a nation can come back from a bloody war.

There are similarities between Cuba and Vietnam. Excepting the million deaths that the conflict between USA-Vietnam left behind, the almost 50 years of Castro I’s government left the nation financially and economically as if it was coming from a catastrophe.

The General is reluctantly supporting Chavez: he is an ally of his brother. An obnoxious political inheritance. The one from Barinas has no brakes. Not even a clutch. Ignores discretion. He has the brain directly connected with the tongue. A capital sin for a statesman.

But the Venezuelan commander has oil. Which is expensive, and Cuba needs it to restart its economy. Raul Castro doesn’t go all the way out, he prefers to follow him from a prudential distance. He uses logic. If Chavez has won the power through elections once, the same electoral system will take him back home.

That’s why he goes all the way out for Brazil. It is not a bad option. The green giant is the number ten economy of the world. The left, that governed and currently governs, has demonstrated a capacity beyond its third world political discourse against poverty and in favor of the social justice, being guests at the White House galas and in world economic summits.

Moreover, Brasil has the necessary technology to extract the possible crude oil deposited in the sea bed of Cuban waters, and its exploitation will end the Cuban dependency on the Venezuelan oil.

In fact, right now, Brazil is an important economic partner for the government. 800 million dollars on the Mariel project speaks for itself. The already started construction west of Havana promises. And promises a lot. According to the figures of local analysts, it will be the biggest harbor in the Caribbean, with capacity to store more than a million containers, and with factories and duty-free zones in the near future

When the embargo is finally lifted and Castro’s heirs are welcomed in Washington, Miami’s cove as a door to the Americas may pass to a second place. It is the opening of Castro II’s play. He knows that no USA politician in office will dialogue with him or his brother.

And in advance he prepares a dolphin. Therefore, the current reforms of the General have several steps. And at the end the balance will be leaning towards a market economy. He hasn’t been dogmatic either.

When he notices that something does not work, either excessive taxation or absurd rules, as in the case of increasing the number of chairs in a ‘paladar‘ (a private home restaurant), lowering the taxes on gypsy cabs or increasing the amount of acres and the lease time for small farmers, he changed all of these without hesitation.

To maintain the Biran dynasty, the General will cede anything he has to. Including, to design an opposition to meet his needs. Remember, Raul is a full-time conspirator. Of course, the real reforms will begin after the death of Fidel.