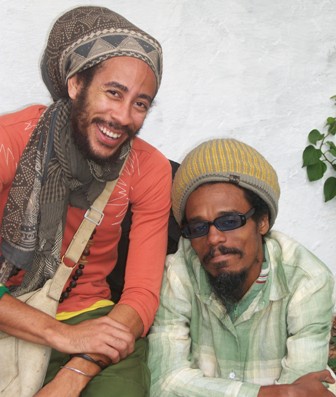 Sandor Perez, A 29-year-old Rastafarian, had no reason to celebrate this May 1st. In February he was dismissed from the Communal Services of Havana East, where he worked as a street sweeper. His boss told him: “If you don’t get a haircut, you can’t keep working with us.” Sandor had bought with his savings his own little cart for picking up trash.

His long hair curled under a turban does not meet the ’good behavior and appearance’ requirement for belonging to a state entity. Graduated with an associate degree in Naval Construction; he did not exercise thattrade because of the institutional rejection of his beliefs.

“I have applied for several jobs,and generally they don’t choose me because of my appearance,” said Sandor. “The only possible optionsfor the Rastas in Cuba are to work cleaning streets, in agriculture or in construction. I don’t know anyone who is a doctor, teacher or delegate of the National Assembly,” he added.

A four-year old girl depends on the young Rasta. During the month of March he sought work on the ’Hanoi’ Organoponico in the capital neighborhood of Alamar (a place where agricultural products are cultivated and sold), but the answer was, “Come another day to see if something appearsfor you.” He went 10 consecutive days, with the hope of getting a job.

On the morning of the eleventh day, the boss of the Organoponico told him, feigning sadness, “The job vacancy is already filled; if you had come yesterday. . .” Sandor replied: “Look, don’t pay me with money; I can do with a daily bundle of lettuce for my I-tal (natural foodproper for the Rastafarian diet).” The proposal was not accepted.

Carlos Cantero, a Rasta of 36 years of age, also worked as a trash picker some weeks ago. “I was expelled because of my dreadlocks” (Rastafarian hair style). Moreover, he assured that some of his Rasta brothers have not withstood the pressure and have had to cut their hair, which goes against thecommands of the religion.

Without precise official statistics, some Cuban Rastas affirm that the unemployment rate of the community is high. In order to subsist, they are obliged to fulfill the stereotypes imposed by the socialist society. Is it for everyone, the happiness of celebrating the work of the Revolution on the International Day of the Workers?