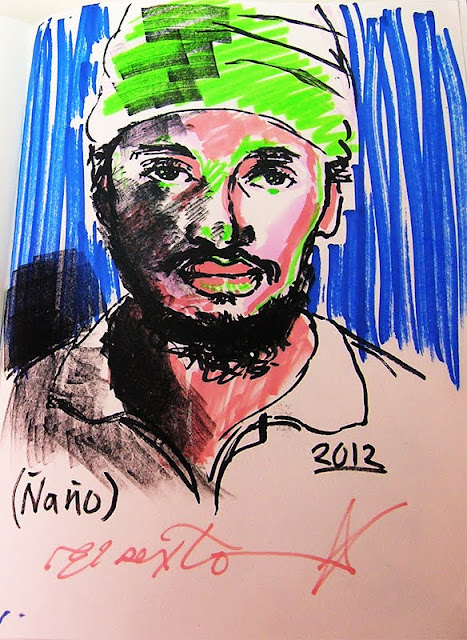 I, Hector Riscar Mustelier, declare in writing what really happened on Wednesday 16 November 2011.

We left the National Cabaret, where we were working the Heritage Group, a reggae band, of which I am director.

We were Adrian (props), Daniel (drummer), Zenén (sound engineer) and I, crossing the corner of Prado and San Jose, where we were stopped by an officer with badge number 44777. He asked for our ID cards and tells us we can’t continue, but Zenen didn’t have his ID so we explained that we’re musicians who come out of the club every Tuesday we’re there. Then comes another officer, called Duruti, standing behind us.

As I was carrying a bag with a DVD, the officer no 44777 asks to search us completely, purse, pockets, everything. He tells us that we can continue and we get ready to do so when another one appears — 45717 — who wants to check IDs again. We say that we were already searched by another officer, but he aggressively orders us to put our hands on our heads and spread out legs.

We began to tell him that our audience was still coming out, and it was a spectacle in the street, that he could take me to the station in handcuffs if he wanted, but it was a violation, that he can’t search a citizen against his will by force, because the Constitution protects us, at which point the officer is still more agitated, and physically assaults me taking me by the neck and punching me in the back, ripping my shit, putting me on the ground and putting handcuffs on me.

In the struggle my white turban had fallen to the ground. The officer stood me up at the same time the patrol car arrived. I was very insulted, like my colleagues, who could not believe that abuse was permitted, and they were also grappling with the police, and that is why they also put Zenén in the car. Inside the car I see Duruti and 44777 outside, speaking separately. The officer 44777 comes up and says something to the patrol car officer who can not hear because we were still grappling with 45717.

Upon arriving at the Dragones police station they took my bag and soon the three officers arrived, talking softly to the guard. We were sitting on the bench, paying attention and hearing him say to the duty officer, turning to 45717: “You accuse him because you’re in the [Communist] Party and no one will doubt you.” So they’re plotting it all in our face.

Then they begin to accuse us of drugs and we argue with them, against the lie.

They say the drugs were in my turban. Which is a big lie because everyone saw when my turban fell to the ground, and there was nothing either on the ground or on my head and everyone saw it. It was a brother and a witness who handed me the turban in the patrol car, and this can be clearly be seen recorded in the cameras there and we demand that these images appear and are displayed, because these films are or should be in the service of safety and security of citizens. Consulting them, there can be no confusion: all my clothes were white, easy to see in the dark, and every movement had to be recorded.

Continuing the story in the police station, they continued with their offenses while an officer without a badge, in black leather, showed a ball wrapped in nylon and said it was drugs, directly accusing me of having it in my belongings. Soon the experts came and took me up. I was very upset with all the injustice that I was a victim of, I know of similar stories but had never lived it myself, at all. I decided not to speak a word. I knew I needed a lawyer. They were mocking and accusing me as if everything is an absolute truth.

Then a higher level official dressed in dark green says that the proof was in the promotional papers for Herencia: he’s referring to some invitations related to promotional group that were in my bag, they took when we entered the station, along with the DVD device. Of course the invitations had been manipulated long before the arrival of the experts, down in the folder.

I kept quiet, just said I wanted to speak in the presence of an attorney. Every passing minute there was more confabulation. Soon an officer came from narcotics, talked and left. Then comes another narcotics official from municipality of San Miguel del Padrón, with whom I had a discussion.

Before, years ago, he worked in Central Havana and wanted me to work for him and even gave me his phone. I gave him some brochures to learn our way of life, philosophy and ideology of African culture, where it becomes clear that our idea is the unification of our race, spiritual prosperity, peace and love in everything and everyone. But from the viewpoint of the police and government we are just hairy black drug addicts, persecuted and repressed by the police elements of this country.

I made it clear to this officer that I would never work for him. He said in 2005 that one day I would regret it and he would retaliate. I didn’t make a case of his threats and I never heard from him. Now he got angry, saying by way of derision (I quote) “So you took to drugs! You can make a fuckin’ lot of money with drugs… ” What a phrase worthy of a chief national anti-drug department.

“Sure you have every luxury at home,” he said. Everyone knows how we live humbly at home with my mom and my wife. This officer wanted to provoke me. I just opened my mouth to say: “LIAR, you say that because I never worked with you.”

Then they took me to the station where I was assigned an “instructor”(investigator/interrogator) named Yordanis, who insisted for days that I make my statement, fooling me saying he would investigate the matter well. I told him I had evidence to disprove all the police farce and that was when I stated this in my own hand.

We now know, all that is on file 826/11, they have set a trap, using my declaration, adapting it to the police, with all their lies so well organized. The cost of my statement has been the loss of the only visual evidence in my favor, disappeared.

Now the file is back to the station with the sole intention of “fixing” pretty much everything, or leaving out details that were inconsistent, so that they are perfect. They used my mom to sign a record of delivery of DVD that was never dealt with because they were so busy at the Dragones station constructing their lie that they had no idea of dealing with the DVD.

They falsified further investigations of my Committee for the Defense of the Revolution (CDR): having cards made by the comrades of the CDR, where they say they haven’t gone to check anything, neither in Cerro nor in Central Havana, and are fully prepared to declare in court.

Only because of the type of people we are, Rastafarians, in the false investigation they say the worse they say about about a person. I know no one with cars and motorcycles, only a few who visit us very little. The bikes that come to visit are for two People’s Revolutionary Police investigators that are our neighbors living in the same hallway.

The comrade who appears declaring now (named Ernesto), after the P4 the prosecution sent, said that someone in turn says that I used to sell in the National, but in his opening statement only said that I had seen “smoking.”

Everything has been improved to incriminate me for a traffic offense that is not mine, committing unjust illegalities that not even a lawyer has the courage to denounce.

Back in 2003 I did serve an unjust traffic sanction that was reported but nothing came of it, but now, according to the fabricated record, I also engaged in the planting of marijuana, that makes us all ask, where is that seed? What’s happening? Can this really be happening here in Cuba? Or is that the police accept that they invented everything? Or is it better, rather than to be just and true, to judge someone who has committed no crime? Someone who in any case they have to help do justice to the truth, but not harm through abuse of power, because it is not for this reason that we have the security police of this country.

Or, if this does happen, then there is: injustice, illegality, corruption, manipulation, deceit, violation of human rights, abuse of power, ideological discrimination and racism.

No more for now. Hoping for ultimate justice and fair use of my rights, and rights of the true facts, and to soon recover my liberty, unconditionally.