14ymedio, Ricardo Fernández, Camagüey | February 8, 2019 — The strict regulations for the entry of men into Cuban maternal hospitals ruined the plan that the new parents had imagined: she, still exhausted by the birth but happy, while he takes the first photo of the baby to show the family.

Despite the fact that the general regulations of hospitals, in force since 2007, don’t include limitations on a father accompanying a woman during the birth and recuperation phase, in the country’s maternal centers men are only allowed access, for an hour each day, to the rooms where mothers rest after giving birth.

Outside the Gynecological-Obstetrical Provincial University Hospital of Camagüey, this week fathers were crowding to enter for visiting hours, planned between five and six in the evening. Some had not yet met their babies and, in their conversations, complaints about the restrictions on access were mixed with expressions of happiness for the new child.

“Fathers are totally prohibited from staying in the birth rooms and access to the [recovery] rooms is only permitted during these visiting hours,” repeated the security staff. While the wait lengthened, some men recounted details that had reached them by telephone. “They say that the baby was born with a tuft of hair,” said one, full of pride. “They told me that the girl is just like her older brother,” added another.

“Let’s use logic. This is a women’s hospital in which the privacy of the mothers has to be respected,” a nurse from the hospital explained to 14ymedio under condition of anonymity. “The rooms where the mothers go after giving birth are shared, and doctors have to treat the wound from the episiotomy, so they need to protect the privacy of the patients,” she added.

For Yilber Durán, a young man from Nuevitas who was waiting in front of the hospital to meet his third baby, these rules are, at least, “arbitrary.” The lack of public transportation after six o’clock in the evening from Camagüey to the municipalities of the interior didn’t allow him to meet his baby until now.

“Since I can only see my wife between five and six in the evening, I had to figure out who to leave the other children with to be able to come and stay in the city after visiting her, because I don’t have my own transportation to return to Nuevitas,” he explains to this newspaper. Durán spent the night in the entrance hall of the maternal hospital, nodding off in a seat, like other fathers in the same situation.

According to official figures, almost 80% of the childbirths of the province happen in this hospital, which records some 6,000 each year. The scenes of fathers waiting outside or in the cramped lobby, popularly known as The Stork, have become common. Some can be seen early in the morning trying to find a clean bathroom near the hospital and others with a toothbrush sticking out of a pocket.

“I wanted to take care of my wife when the girl was born. It is my right as a father, but no matter how much I explain and ask, they don’t allow me,” complains Reinier Menéndez. “The height of the phobia against men is that at hospital admissions where they do the entry process, we can’t go through to the consultation area and there aren’t even bathrooms for us,” he laments.

The United Nations International Children’s Emergency Fund (Unicef) promotes responsible fatherhood and insists that this implies “being involved in all the key moments of development” of the child: “from family planning, pregnancy and prenatal health, preparation for the birth, childbirth, early childhood, childhood and adolescence, and for the entire life.”

“Men can’t stay here because there aren’t the conditions for that. It’s not a whim of the institution, we are defending the privacy of the women,” an employee of the Public Service Department at the hospital who only identified herself as Miriam explained to this newspaper. “From the time the woman enters for the birth she has a female companion who will help her until she is discharged,” she specified. 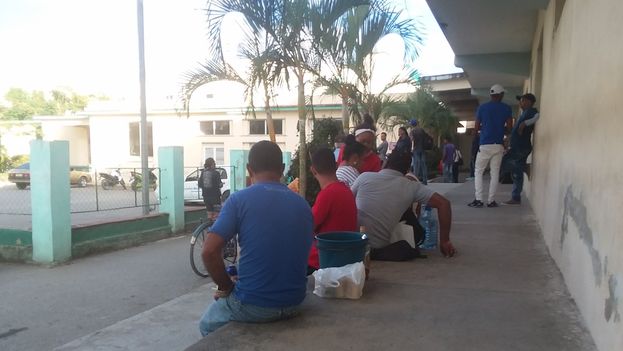 Some fathers can be seen early in the morning trying to find a clean bathroom near the hospital and others with a toothbrush sticking out of a pocket. (14ymedio)However, the situation becomes complicated when the future mother has no female family member or friend who can accompany her in the process. In several testimonies gathered by this newspaper of cases in which the pregnant women were not able to arrange female company, the hospital administration did not soften the restriction on access for a male companion.

In a telephone inquiry with more than ten maternal hospitals all over the country, the response was invariably the same. “Fathers cannot enter for the birth for reasons of hygiene and privacy,” “men are not permitted to accompany their wives during the birth phase,” and “they cannot stay in the rooms where they are placed after giving birth.”

Hundreds of kilometers from Camagüey, in Havana, Ronald, 34, just had a similar experience. “Ever since my wife started having the first pregnancy consultations, we told the doctor how important it was for me to be able to be there at the birth,” he explains.

“I wanted to experience the arrival of my first child,” he says. “I even got the clothes to enter the birth room and I prepared myself for that moment.” When Ronald’s wife began to feel the first contractions and they arrived at the hospital, the plans went to pieces. “They told us that it’s not done that way in Cuba and that men cannot go in for the birth, it was a big frustration.”

In statements to the official press, Dr. Ramón Rivero Pino recognizes the problem: “For many fathers it is frustrating arriving at the hospital accompanying their wives at the moment of birth” because “they feel that the entire shared experience, the good and bad times together as a family in relation to the child on the way is lost (faced with the access restrictions for them).”

“The demands of the hospital system place a barrier, an obstacle that doesn’t allow this work of three that was being done until that moment to continue,” emphasizes Rivero.

In Ronald’s case, the frustration of not being able to “be there for such a special moment” is even greater because he saw how two of his friends managed to access a birth room, “one because he is a doctor and the other because he paid to be there.”