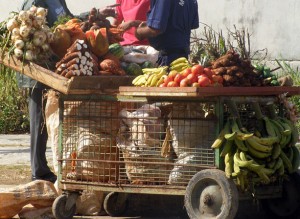 Sometime after eleven at night, Alfredo, 66 years old, plants his folding chair and small plastic table at October 10 and Acosta streets. On this centrally located Havana corner he sells freshly brewed coffee. He has a large clientele. Nighttime entertainers, drivers from a nearby taxi stand, nightwatchmen, tranvestite prostitutes from the area and policemen in patrol cars visit Alfredo’s stand to buy strong coffee at two pesos for a small cup or three for one a bit larger.

“It’s not bad. I make between 120 to 160 a day. Sometimes more. Of course, I am up until dawn. Around 7:30 in the morning is when I go to bed,” says the elderly gentleman. If Alfredo had to live on his pension alone, he would not be able to have two meals a day or to go from time to time with his wife and grandchildren to a cafe in the Carlos III Commercial Center to have a beer and some hamburgers.

Danilo, 69 years old, is up by then. At dawn he roasts three pounds of peanuts and wraps them in a hundred paper cones. Later, he goes to various bus stops to hawk his product. He sells each cone for a peso (0.05 cents to the dollar). “I don’t always sell all the peanuts. There is a lot of competition. I don’t make much money, maybe 50 to 60 pesos a day. At least it helps me buy groceries,” Danilo says smiling.

It has been awhile since Natacha, age 49, put aside her degree in literature. It was more profitable for her to use the doorway of her house to sell small cups of ice cream for five pesos and carbonated drinks for two. High school students are her major clients.

“I buy the ice cream from a private producer. The carbonated beverage I make myself with a machine that I got for 80 convertible pesos. When I tally my receipts at the end of the day, they often amount to more than 200 pesos. As a professional I earned a salary of 480 pesos a month. You tell me if it’s worth it to keep the diploma in a drawer. Besides, I am my own boss. Everything depends on my efforts,” Natacha says.

Small retail businesses are sprouting like flowers all over Havana. Many private-sector workers feel they cannot make a profit running a cafe or a restaurant.” To open a restaurant or a good little cafe, you need more than two thousand convertible pesos. Since money is scarce nowadays, people in general tend to eat bread with croquettes or mayonnaise, fried food, stuffed potatoes—things that cost less than five pesos. I had a cafe that offered a wide array sandwiches and beverages. But the high prices—45 and 15 pesos for a sandwich—forced me to close,” an elderly cafe owner explains.

Certainly some cafes and privately-owned restaurants are going full steam, but most of the self-employed do not have enough capital for a large-scale business. They prefer to work as small-scale retailers.

Or driving a taxi which, according to Orlando, is the most profitable. “I work for a guy who has five cars and rents them out. We have to pay him 550 pesos a day if we drive a five-seat car. If it is a yipi with with ten seats, then we pay a thousand pesos a day. We don’t have to invest in anything. He takes care of gas and repairs. In one day I take home more than 600 pesos in profits,” he says.

In the central and oldest part of Havana there is a proliferation of tables with people selling costume jewelry, clothing and shoes. Thousands of stalls offer pirated CDs. At Antonio’s stand there is a wide selection of TV programs, films and soap operas. He sells DVDs for 30 pesos. He also has video games. If you cannot find what you are looking for, Antonio—always conscientious—tells you to come back the next day. “If you give me your word you will be back tomorrow, I will knock off five pesos.” Given the proliferation of vendors, it is often the ones who offer discounts or good service who snag the customers.

Sales are going extremely well for some; others are on the verge of bankruptcy. But all feel that it is better to work for themselves than to work for the state, which pays less, demands more and does not reward them for their work.

Photo: One of the many carts which which can be seeing daily on the streets of Havana selling garlic, onions, yucca, bananas, tomatoes and beans, among other farm products. From Primavera Digital.