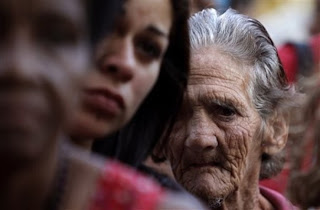 She enters the room in search of her son; on the previous visit they told her he was in the punishment cell for indiscipline, he would be there for twenty-one days with half rations of food and no sun; so, to see him, she would have to come back the next month.

Now, she searches through the dozens of prisoners with their families without finding her son; it’s impossible not to recognize him, the guards must have been wrong to let her enter the visiting room. She goes to the door to ask the officers; her son isn’t there. They insist he is and show her his photo on the card everyone has for identification.

The mother returns to the room and patiently searches, one by one. Coming to the last one without finding him she starts to cry, but understands that she’s losing time and later the guards won’t take it into account, so she overcomes her nervousness and starts to search again, also fruitlessly.

When she returns anxiously to see them the guards fly into a rage, they tell her son is there, that if she didn’t raise him, find the person who did to show her where he is.

She prefers to keep quiet, without clarifying that she raised her children alone and never had anyone to help her. And she looks again at each face. When she searches and doesn’t find him, she ashamed to bother the sergeants one more time.

In the room, there is only one boy who is sleeping, alone, with his face hidden in his arms, but as much as she looks at him there is nothing to indicate he is her son. The shaved hair, too small head, skinny arms, very white skin and narrow back. Her son is tall and strong. Still, she notes that all the prisoners are with their families and he is not. She approaches him, heartbroken, despite knowing that he needs to sleep.

Fearfully, she touches his shoulder; the boy raises his head and hugs her.