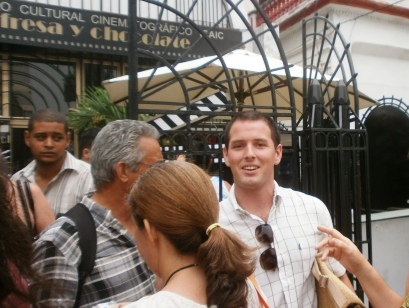 A single presentation was applauded last Thursday at the event held by the magazine Temas (Topics). It was that of the young engineer Carlos Fernandez-Aballi Altamirano, professor at the Polytechnic University (CUJAE). This young man explained his experience — or rather his bad experience — as “a self-employed” in the production of dehydrated garlic. At first it made me smile, but after his presentation I approached him. Loquacious and passionate, what is most notable is his creative intelligence. He talked about the frequent attempts to implement modern technology in underdeveloped countries as if they had the same conditions as exist in the First World. To make them workable in an environment like ours seems to be his inspiration.

Fernandez-Aballí is 28 and received his doctorate in Bristol, England. While still a student he won two international awards, and then a third, in Cuba, providing him funding from the Spanish Agency for Iberoamerican Cooperation for to build 100 houses using rice husks, among other materials. I’m not capable of repeating the technical explanation of the advantages of rice husks, but it was convincing. This project failed because the authorities of the municipality where the homes would have been built never responded to the proposal. But this guy is not of those who is daunted. He prepared the feasibility study, especially considering what it costs to import garlic powder for cooking, and with two other friends, he started up the production of dehydrated garlic, granules or powder.

Production has been a success. The product satisfies quality and hygiene standards, but when I asked where it was marketed, Carlos surprised me saying that he could not sell it in the farmers markets, although the price is affordable and the presentation attractive, because… There is no space available for this product. At this point, a suitcase full of samples to give away, was empty.

As long as there are people like this, nothing is lost. Remember this name.