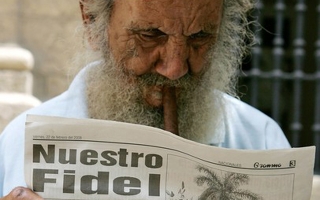 When Leandro was born, back in 1930, there was no television. Of course, there was no Internet, computers or mobile phones either. The radio and the movies were no longer silent, and newspapers used to have many pages.

Leandro still remembers when at age 13 in San Antonio de los Baños, he saw two planes flying in perfect combat readiness. “Those iron birds have surpassed God’s imagination”, he said to his father, a mechanic at a military base on the outskirts of Havana.

Leandro was 27 when he joined a cell of Action and Sabotage, from the 26th of July Movement, which one night in 1958 paralyzed the city placing 100 homemade bombs and Molotov explosives everywhere.

Back then Leandro thought that the man’s imagination had reached its limit.

“Everything has been invented. Phones, cars, trains, planes, ships and even atomic bombs, so stop being a pussy,” he told a friend, fan of U.S. magazines on science and technology, after he commented that one day men would fly to the moon and robots would control the production of steel and automobiles.

Since then, Leandro became agnostic to science. Science was too difficult for him. He would rather read the subversive pamphlets. His Bible was Fidel Castro’s tract, “History Will Absolve Me”.

When on January 8, 1959 Fidel Castro came into Havana riding a Sherman tank, bearded and young, Leandro and his colleagues from Action and Sabotage occupied several police stations and looted the homes of Batista’s henchmen.

They also robbed some the empty homes that seemed to be too elegant. This is how Leandro acquired his first Frigidaire fridge and a record player, whose brand he does not remember.

A little later, they took some baseball bats and meat axes, and tore up the casinos, roulette tables, poker tables and slot machines. He was a man cut out for fighting and brawling.

Leandro recalls a hot night in 1960 when his superior, from the emerging revolutionary police, gave him with the task of organizing small groups of civilians who would be responsible for destroying the offices and workshop places of several national newspapers.

A small talk with his battalion chief remained recorded in his mind forever : “Here, what counts is what Fidel says. If the Comandante says that this is Communism, we are following him. Loyalty is what matters. Questioning is for pussies.”

That was the high point in his life, and still is. Devotion to a leader. He fought in at the Bay of Pigs, and was trained in techniques of sabotage in a secret military base, and under a cold drizzle, in October 1962, he swore he would rather die in a nuclear holocaust than yielding before the political pressure from the Yankees or the Soviets.
Leandro was in several battles and civil wars in Africa. He did not care who he shoot to. He did not care if they were blacks from the UNITA, white South Africans or Somali soldiers who were on his very same side in the previous years.

His thing always was to follow the orders of Fidel Castro, the “Commander in Chief. “Count on me for anything Fidel, for anything.” Nothing else mattered.

In 1980, Leandro was an angry demonstrator, in charge of bringing together people from the neighborhood to shout insults and throw eggs at “the degenerates, sons of the bitch,” who decided to leave the island through the port of Mariel.

Leandro did not feel comfortable with a civilian life. It took him seconds to charge and discharge an AKM (a Russian rifle). It was boring for him to lead “that bunch of lazy asses and drunk  people who worked in that ceramics factory.”

The “lovely moments” of the revolutionary violence were over. The Berlin Wall had already been swept away by history. And the fraternal Soviet comrades quickly packed up  and departed back to their republics, which turned into independent and sovereign nations, as fast as the eye can see.

“Nobody can understand the world. These mother-fuckers and soulless Yankees cleaned our clocks in this war of ideologies,” says Leandro sitting on his balcony.

In the 90s our mission was to resist. And watch over “the mercenaries and counterrevolutionaries”. There were a few in his neighborhood. When the Combatant Association ordered it, “we organized a repudiation act for those bastards.”

At age 81, Leandro continues to hold firmly onto his same ideals. He confesses he would give his life for Castro. Although he hesitates about it when it comes to Raúl: “He is doing things that I don’t agree with. Giving space to faggots and transvestites is a time bomb. And it is dangerous to give so much space to the self-employed. When they start making a lot of  money, they’re going to stab him in the back, I assure you.”

Despite the questioning, when his cell phone rings, which was given to him  by the Association for urgent mobilization, and the call is about responding to regime opponents with a barricade, Leandro continues to attend.

“Orders are fulfilled. Not discussed. It’s that simple. It’s either them (the opposition), or us. If those bastards ever take power, they are going to do the same. Luckily, I am old,” he says.

And he asks his grandson to check the cell phone for him to see if he got any messages.” I don’t know how this thing works.” When I was born there were no cellphones or Internet.