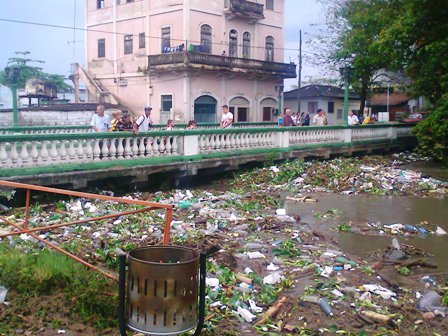 The well-known Bélico River in Santa Clara is showing, in these rainy days, the pollution in the city of Marta, causing astonishment among the people passing by and the rest of the population.

Santa Clara, capital of the Villa Clara province, was founded on July 15, 1689, under the shade of a tamarind tree, by 14 families from the village of San Juan de Los Remedios who declared its foundation after a public mass. This took place in what is now Parque del Carmen, named after the church that stood there, and where a tamarind tree was kept in place to honor the historical fact.

It was the capital city of Las Villas (Santa Clara, Cienfuegos and Santi Espíritus) before the last political-administrative border division* given by the so-called revolutionary process; the splendor of this city was always contagious to its visitors, and it distinguished itself by its hospitality, and the cleanliness of its streets and residents.

The Bélico River, cuts through the city; it was a navigable river, where Mrs. Marta Abreu Esteves, benefactor of the city, created public laundry sinks for the poor women. The sinks were later tarnished with the building of the Minerva and Ochoa dam, another Castro invention that ruined my beloved hometown.

The images published on this post denounce by themselves the health authorities of Santa Clara and of the province of Villa Clara, the waste management services, and the office of the monuments; in the background of the images, you can see the monument to The Armored Train, and there it says “triumph of Fidel Castro’s Revolution” and there, a question comes to my mind: “Aren’t the monuments also interested in the hygiene of the city?”

I share this enormous pain with people from this place. In my Free Cuba, I want Santa Clara and the city of Marta free of pollution and dirt, and for that I will work.

*Translator’s note: Before the Revolution Cuba had 6 provinces, it now has 15.